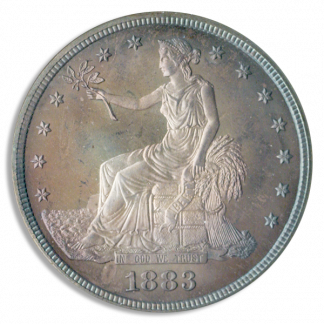 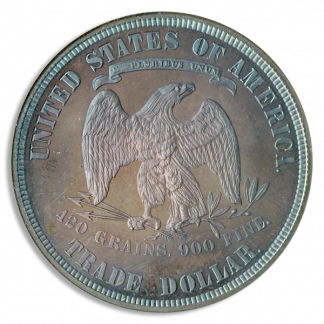 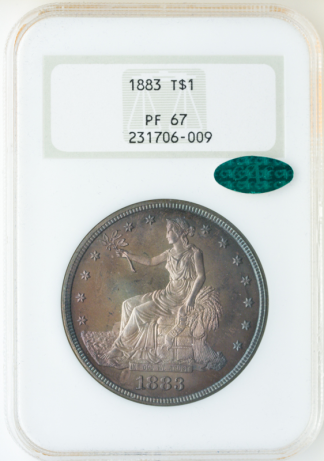 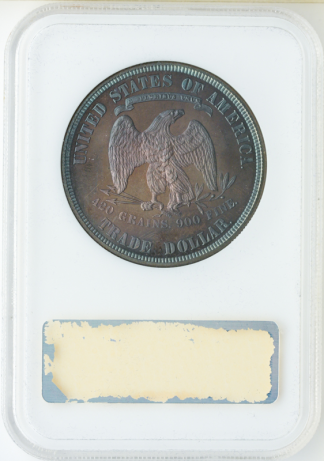 In the late 1860s and early 1870s trade between the U.S. and China was increasing. However, a threat to this trading emerged from the unlikeliest of places; the Mexican peso.

Many Chinese businesses preferred the peso to U.S. currency because the peso contained more silver than the standard U.S. dollar. This characteristic of business abroad meant that U.S. businesses had to exchange their dollars for pesos which generated costly broker fees. The government’s answer to this problem was the trade dollar.

The U.S. started to mint trade dollars in 1873. The trade dollar consisted of 90% silver and weighed slightly more than the peso (420 grains vs. 416). During the first two years of production the U.S. sent nearly all the minted coins abroad to ease trade problems. Soon after, they granted the coins the status of legal tender domestically.

The trade dollar was a success abroad. Chinese businesses embraced the coin and preferred its heavier weight over the peso. Chinese merchants often put a “chop” mark on their U.S. trade dollars. These punched Chinese characters indented on the surface of the coin were likely a method for testing the authenticity of the piece. As the coin passed from one merchant to another it would occasionally receive multiple chop marks.

U.S. mines in the western regions of the country were yielding enormous amounts of silver. This influx of precious metal disrupted the supply and demand dynamics in the market. Silver prices plummeted. As a result, the trade dollar fell to an intrinsic value of just 80 cents. Soon after, the U.S. saw large amounts of trade dollars flow back into the country where Americans spent the coins at their face value. In response, Congress acted and revoked the coin’s status as legal tender in July of 1876. They continued to mint the coin, but only for the purpose of exportation.