Produced by the 1,100-year-old Royal Mint, the British Sovereign is the Mint’s flagship coin. It was named after the English gold sovereign which was last minted in 1603 and got its start during the Great Recoinage of 1816. Initially, this newest sovereign did not enjoy public popularity; banknotes were still the preferred method of payment. However, once paper currency value was limited by law, the sovereign became not only a popular circulating coin, but was widely used in international trade.

The first gold sovereign of this period featured the bust of King George III. As subsequent monarchs came to the throne, the sovereign was redesigned to their likeness. George IV, William IV, Victoria and Elizabeth have all had sovereigns during their reigns.

The reverse was originally designed by sculptor Benedetto Pistrucci in 1816. It features Saint George on horseback. He clutches the reins in his hands and his cloak is flowing behind him. His right hand holds his sword, which he has successfully used to slay the dragon which lies beneath his horse. Pistrucci’s design is in the Neoclassical style, which was at the height of popularity at the time. 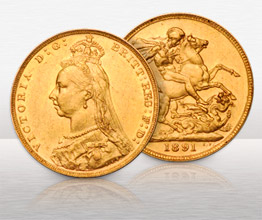 In 1887, Queen Victoria I celebrated her Golden Jubilee, commemorating 50 years of her reign as the Queen of England. Minted between 1887 and 1893, her image on the coin is based upon a bust created by artist Francis John Williamson. Victoria remained Queen for 63 years until her death in 1901. 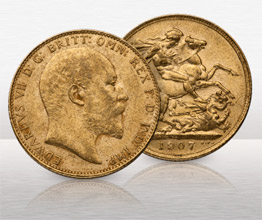 Sovereigns honoring Edward VII were struck between 1902 and 1910. Edward ascended to the throne in January 1901, upon the death of his mother Queen Victoria I. His reign was ultimately a short one, and he passed away in May of 1910. 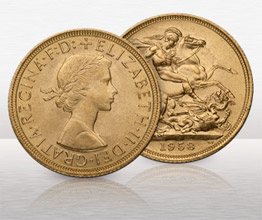 As the United Kingdom’s longest ruling monarch, Queen Elizabeth II has been featured on five sovereigns throughout the years. The Young Queen sovereign was produced between 1957 and 1968. The obverse design was created by sculptor Mary Gillick. 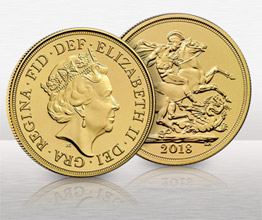 These internationally renowned 22 karat coins are designed and minted to the highest standards—the Queen of England’s. Their worldwide recognition means that when you invest in them, you add liquidity to your portfolio.