Blanchard and Company, Inc. is proud to work with outstanding financial analysts that partner with us to provide our clients with the most up-to-date, relevant investment advice.

Danielle DiMartino Booth is a global thought leader on monetary policy and economics. DiMartino Booth spent nine years at the Federal Reserve Bank of Dallas where she served as Advisor to President Richard W. Fisher until his retirement in March 2015.

She continues to research, write and speak on the financial markets, focusing recently on the ramifications of credit issuance and how it has driven global fixed income, equity and real estate market valuations.

In her new book, Fed Up, she explains what really happened to our economy after the fateful date of December 8, 2008, when the Federal Open Market Committee approved a grand and unprecedented experiment: lowering interest rates to zero and flooding America with easy money.

1. Has U.S. monetary policy lost some of its effectiveness? When the next economic recession hits what tools or policies do you expect from the Federal Reserve? What could this mean for typical Americans and their pocketbook?

The Federal Reserve has lost some of its efficacy. Quantitative Easing (QE) failed to ignite strong, sustainable growth and it has rendered the economy that much more vulnerable come the next downturn. Sadly, the Fed will most probably resort to more QE as they have so little ammunition to fight the next recession in the form of interest rate reductions given the fed funds is only now at 2%. A loss of confidence in the Fed could be very problematic for U.S. households as the inequality divide has already laid the groundwork for higher taxes on income earners.

2. Why has notable inflation failed to emerge after the 2008 global financial crisis, despite the Fed’s massive quantitative easing and liquidity policies?

There are two separate factors at work. On a secular basis, the addition of 1.3 billion workers into the global workforce via China started a trend of Asian countries exporting deflation to the United States. It is noteworthy that this trend is finally exhausting itself. As it pertains to the current cycle, most under-appreciate that debt is inherently deflationary. The “solution” to a crisis brought on by over-indebtedness was apparently piling on more debt. The world had $178 trillion in debt in 2008 and is now it is saddled with $247 trillion. The funny thing about debt is that it has to be serviced. Every dollar of money funneled into servicing growing debt levels is therefore diverted from other purchases and is hence deflationary.

3. Do you foresee the possibility of another financial crisis in the next decade? If yes, what could be a trigger?

Resolving a debt crisis by creating more debt all but guarantees another financial crisis will occur. Corporations are where the debt party has occurred in the current cycle and debt has not been created in the banking system but more in the capital markets and by shadow banks. Identifying a trigger is fool’s game. But one could foresee a catalyst coming from the insanely overvalued European bond market where capital losses could become extreme in very short order due to interest rates there having veered into negative territory. Investment grade debt here in the U.S. also has the potential to be the trigger, especially if the Fed plows ahead with more interest rate hikes.

4. What asset allocation advice do you have for individual investors right now as we face an aging stock market and late cycle economic expansion?

Many municipal bonds offer good value as does cash, as boring as those alternatives are. I am NO gold bug but do concede that hedging your portfolio with gold has been wise in past downturns as most asset classes lose value in tandem, or as we say, correlations line up perfectly when the storm moves in.

5. What economic worry keeps you awake at night?

Public pensions are of grave concern to me. They have just now recovered the losses they sustained from the last downturn. The potential for public pension devastation to ignite social dissent in this country even as Millennials choke on student debt they can’t service is most troubling. This subject is so potentially damaging that I am pondering writing a book about it.

6. Do you see potential for the U.S. dollar to lose its reserve currency status within the next 20-40 years?

The United States operates under the assumption that it can NEVER lose its reserve currency status. That is a dangerous stance given the trajectory of our debt accumulation. The British Pound Sterling eventually lost its status because of similar hubris. Is it an event that could occur in the next decade? Probably not. But the Chinese are intent and extremely patient.

7. If the U.S. were to lose the dollar reserve currency status what could the ramifications be for the U.S. economy, interest rates, inflation and the $20 trillion U.S. debt? What would it mean for hardworking Americans on a daily basis?

The loss of reserve currency status implies higher interest rates. We are an economy that is dependent upon the creation of debt to foster economic growth. We will collapse under our own weight if our debt service costs rise. Absent massive innovation that creates jobs (McKinsey estimates deep job losses to automation in the coming years), we are destined to feel the pain of rising interest rates under a scenario in which we truly lose reserve currency status.

8. What role could gold play in an official capacity over the next several decades in our country or in the global financial system?

As mentioned, I am no gold bug nor do I think it practicable to return to the gold standard. The IDEA of gold is re-introducing discipline into monetary policymaking, for which I wholeheartedly advocate.

9. What are the advantages of owning physical gold bullion? How high could gold rally in the next 5-10 years?

Afraid I am not a gold analyst but I do believe investors should own gold as it is the surest hedge in inflationary and deflationary times, a misunderstood truth about gold. You do not need inflation to have gold outperform; you need economic and financial disruption.

10. What is the #1 most important thing that average Americans need to understand about the economy right now?

The average American needs to understand how very long in the tooth the U.S. economic cycle is and what has prolonged the cycle to the extent that it has been. It was the $22 trillion-plus global QE era followed specifically in this country by historic insurance proceeds via Mother Nature’s massive 2017 which was in turn followed by massive fiscal stimulus and record share buybacks. The bottom line is we are living on borrowed time and should be prepared for what is to follow, which has the potential to be worse that the last financial crisis given we “resolved” it by pouring more debt fuel on the fire.

FED UP: AN INSIDER’S TAKE ON WHY THE FEDERAL RESERVE IS BAD FOR AMERICA.

In Fed Up, DiMartino Booth explains what really happened to our economy after the fateful date of December 8, 2008, when the Federal Open Market Committee approved a grand and unprecedented ex­periment: lowering interest rates to zero and flooding America with easy money. 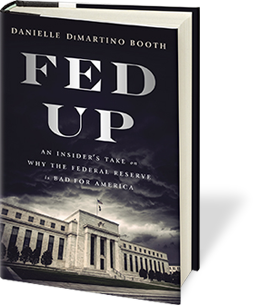