The first French Franc was created in 1360, specifically to use as ransom payment for King John II of France. Featuring a rich design, with John riding triumphantly forward with his sword raised. Even the name of the coin supported this image, with “franc” meaning free.

Until 1641, the French Franc held a value of 1 livre and in 1795, it was reintroduced in decimal form. After two centuries of inflation, the franc was finally revalued in 1960 with each new franc worth 100 of the old.

As with other European coinage, the franc’s design changed frequently, honoring rulers and important historical events. In addition to such pivotal leaders as Napoleon and Louis XIV, designs have also included the gold rooster, which was created after the defeat of Napoleon III in 1870. Roosters represent the bold spirit of what was known as the Third French Republic. 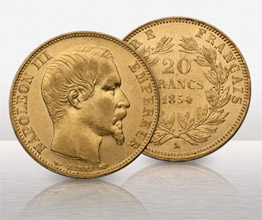 Minted from 1855 to 1859, this sovereign honors Napoleon III, who ruled as a benevolent dictator from 1853-1870. And while things did not go well for Napoleon, his nephew was fairly successful with regard to stability and longevity. After France was defeated during the Franco-Prussian War, Napoleon III was exiled, and the minting of these great coins was at an end. 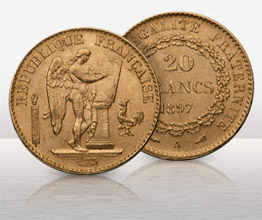 A “Lucky” French Angel saved the designer of the coin from the guillotine. Augustin Dupres was awaiting death when a bolt of lightning startled the executioner. The event was delayed and Dupres was ultimately given a stay and credited his luck to an angel coin he held in his pocket. He went on to design the Angel Franc which was actively minted from 1878 to 1914. Today, it remains a favorite coin for collector and investors. 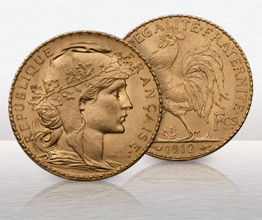 The Gold French Roosters were established after the defeat of Napoleon III in 1870. They represent the bold spirit of what was known as the Third French Republic. The first minting of the Gold French Rooster was released in 1899. Production of these gold coins continued until 1914 when it ceased due to the start of World War I.