You may have heard of palladium and platinum, but have you heard of electrum? 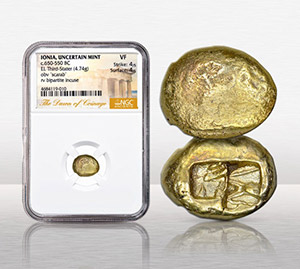 Electrum is a naturally occurring gold and silver alloy that has been used since antiquity to create coins. Today, Nobel Prizes are made of its man-made equivalent.

The Pactolus River in Lydia was one of the ancient world’s most significant sources of electrum. Although others in the Middle East had previously used measured amounts of precious metal as forms of payment, it was the Lydians who invented coinage as we think of it today. In the seventh century BC, the Lydians started making and marking small lumps of electrum in consistent weights. One big downside: the amount of gold in each Lydian electrum coin varied significantly, and thus you could never be certain of an individual coin’s actual value.

The Lydians started heating the electrum gold and silver alloy with lead in order to separate the two precious metals, leading to the world’s first coins made of pure gold and pure silver. Lydian Lion coins were also the first forms of money that bore something like a state seal (the Lydian lion), making them what we today would think of as legal tender. 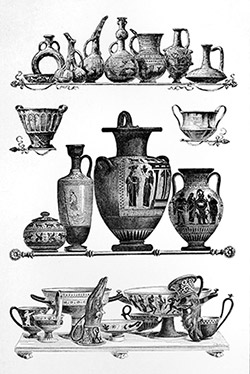 Before this technology for separating the elements existed, however, they were making coins out of electrum in nearby ancient Ionia. Ionia is the name given during ancient times to the central region of Anatolia’s Aegean shore in Asia Minor, present-day Turkey, one of the most important centers of the Greek world.

Here the Greeks founded a dozen mini-states, two of them on the offshore islands of Chios and Samos, the rest of them stretching along the strip of mountainous coastland. During the sixth century BCE, Ionia became the focus of the intellectual life of Greece, a period known as the “Ionian Awakening” and a name for the initial phase of classical Greek civilization. Greeks from the Athens region colonized Ionia around 1,000 BCE.

Electrum worked well for Ionia’s coinage because it was harder and more durable than pure gold. Interestingly, pure gold and silver coins were not initially stamped because they could be weighed to determine their value. However, with an uncertain mixture of gold and silver in each piece of electrum, electrum coins needed to be stamped with the mark of the issuer responsible for its value. Yet this turned out to be quite convenient, and the practice later extended to pure gold and silver coins as well.

Right now, we have a handful of ancient Ionian electrum coins. Their obverse features a rounded and smooth “scarab” (many researchers believe that there is a crude shape of a scarab beetle on the obverse, considered to be sacred in the ancient world). And yes … a scarab is a dung beetle.

The reverse features a bipartite incuse. The addition of this reverse stamp was used to easily prove the content by cutting deeply to show that it was made of solid precious metal.

These Ionian coins truly are remarkable, made of neither gold nor silver, but both, and are 2,500+ years old. Considering that you usually only get to see something so ancient in a museum, it’s even more remarkable that you can own one today—for less than what you’d spend on work lunch in a single year.