In the Oregon Territory during the California Gold Rush years – one important thing was missing – there was no official currency. 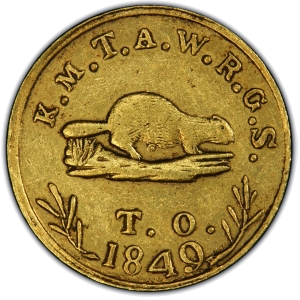 Instead, settlers, trappers, farmers, sailors and merchants relied upon barter to conduct their business in the Pacific Northwest.

Those with a zest for risk-taking chose to trade their lumber, food, tools, furs and other goods to Californians in exchange for gold dust.

It is estimated that over $400,000 worth of gold dust moved into the Oregon region by the winter of 1849 because of this practice.

The Oregon territory desperately needed a standard form of exchange.

A group of businessmen banded together and started a private mint in Oregon City named the Oregon Exchange Co.

They turned  California gold dust into an effective, standardized and widely used medium of exchange – fondly known among collectors today as the Oregon Beaver.

Fewer than 50 gold Beavers are known to survive today and all of the known Oregon pieces are rare or very rare.

While the coins are stamped on the reverse with 5 D. to represent five dollars, these coins were produced with more than five dollars’ worth of gold! The Oregon Exchange Company intentionally added more gold to ensure these coins would be readily accepted by the public and used in commerce.

It was a double edge sword. The high gold content also ensured that many Beavers would meet their fate in the melting pot – since they were worth more than the face value of the coin.

This historic gold coin was made in 1849, a decade before the Oregon Territory became a state.

The obverse of the coin features a beaver on a log surrounded by the initials K.M. T. A. W. R. G. S, which represented the initials of the private mint’s founders. Below the beaver are the initials T.O. representing Oregon Territory. On the reverse the words NATIVE GOLD and 5 D. are encircled by OREGON EXCHANGE COMPANY.

Once the San Francisco Mint began producing coins in 1854 even more of the Oregon Beaver coins were melted for their intrinsic gold content.

For collectors specializing in Pioneer or Territorial gold – to own a treasure like the Beaver Coin would be a once in a lifetime opportunity – representing the rough and tumble times on the far edge of the young American nation.