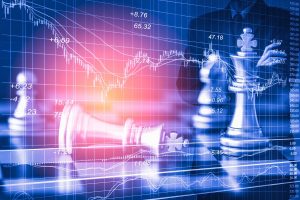 Once you dig beneath the surface and look at what’s fueling the growth, it’s easy to see the high cost Americans are paying for this growth.

This story started about 10 years ago…

Since the 2008 global financial crisis, the Federal Reserve fueled a massive bull cycle in the U.S. equity market through extraordinary low interest rates. That low-interest era is winding down as the central bank slowly hikes interest rates.

For years, Wall Street traders and money managers took advantage of the “punch bowl” of low interest rates, which fueled rising stock prices in what many called a “bubble.”

While the Fed removes the proverbial punch bowl from the stock market, the Administration stepped in with another substitute late last year.

The huge corporate tax cuts increased many publicly traded companies price/earnings ratio. That means their earnings went up as their tax rate went down.

Did the company produce any more widgets? Or, were the company’s actual revenues increased? No. The P/E ratio looks better because most company’s see greater earnings because of lower taxes.

Number one: a huge increase in the U.S. debt and deficit.

The U.S. took on a big amount of debt to pay for those tax cuts and a little bit more economic growth now.

Simply put, policymakers made a trade. They traded bigger deficits for you and your kids in the future for a little bit more economic growth and rising stock prices at the end of the current old and tired expansion cycle.

Policymakers kicked the can down the road, taking a little bit of “good” now for what could turn out to be a lot of bad later.

Here’s a look at the numbers. The Treasury racked up a record amount of debt in the first three months of 2018, borrowing about $488 billion, or $47 billion more than initial estimates, according to a recent Newsweek article.

Here’s what makes this new debt even more worrisome:

“As the U.S. takes on these unprecedented levels of debt during economic boom times, a potential crisis looms: Foreign investment in U.S. debt is currently at its lowest point since November 2016 and has been decreasing steadily since 2008, when foreigners owned about 55 percent of American debt,” the Newsweek article warned.

The costs could include dramatically higher interest rates – perhaps even in the double digits – in the future as America is forced to finance its massive debt amid a world of less-interested takers.

It also leaves less money available for the already burdened Social Security system. In 2037, Social Security is estimated to only have enough funds to pay out about 75% of benefits. Some policymakers now want to slash program benefits to reduce the rising debt burden. That will only hurt everyday Americans, most who already haven’t saved enough for retirement.

There’s Never Been a Better Time to Buy Gold

Once you look beneath the surface and realize the rickety house of cards the current economic growth and rising stock market is built upon, the value and dependability of gold looks better than ever.

Current market conditions offer investors a rare opportunity to protect their wealth and insure their future with physical gold. While you can’t control what the government does, you can control you own financial future. Buying physical gold now could be an invaluable move to protect and preserve your financial security in the future, which looks more uncertain all the time.