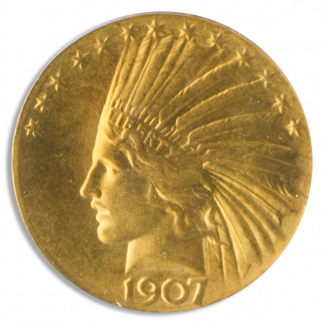 The first version of the $10 Indian to be minted was produced with a “wire edge”, more properly called a “knife-edge”. A wire edge is a very thin, raised rim just outside the border of the coin, which is formed when metal is forced between the collar and the dies. This proved to be impractical, as the raised edge prevented the coin from stacking well, and also impeded the coin’s ejection from the press. To correct this problem, the edge was redesigned to have a more conventional flat, raised rim, and is known as the Rolled Edge Type. This change achieved its objectives. For some unknown reason, though, this version was rejected and a third design was introduced lacking the periods between the words. On the reverse of the first two versions of this coin – wire edge and rolled edge – there are triangular periods between the words, as seen above. On the later, adopted version, the periods have been eliminated. The “No Periods” design is also in lower relief than its predecessors, most likely to improve the strike quality. This design was finally approved, and coins were minted for circulation in 1907 and 1908.

This Type displays Miss Liberty facing left wearing an American Indian headdress. Above her are 13 stars aligned along the edge, and below her is the date. The band of the headdress has LIBERTY in relief. The reverse has an eagle with folded wings standing on a bundle of arrows, around which is a branch of olive. The denomination is placed at the bottom, the motto appears above the eagle’s left shoulder, and UNITED STATES OF AMERICA arcs across the top edge of the coin. The edge of the coin has 46 stars in relief, reflecting the then 46 states making up the United States of America.