1806 Draped Bust Silver Half Dollar - Blanchard and Company
My Account

She is a busty beauty with flowing long hair.

This 1806 classic silver half dollar, the Draped Bust, has outstanding eye appeal and a natural heft to hold in your hand. 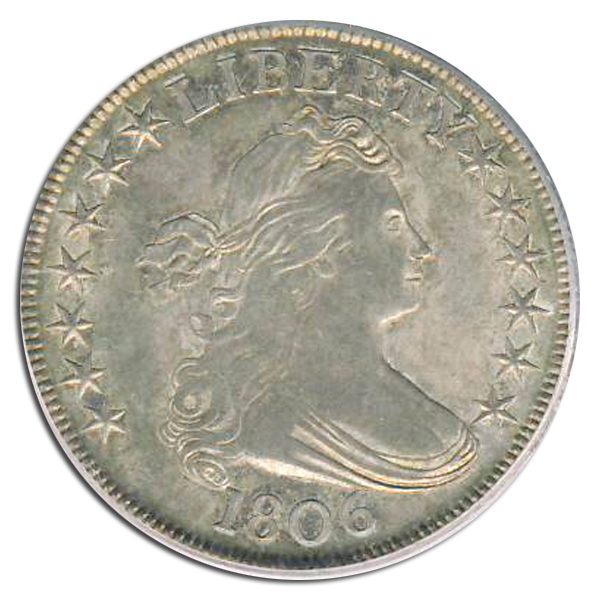 Congress first authorized the creation of a half dollar in April, 1792. The Draped Bust version was struck from 1796 through 1807.

Collectors have numerous varieties to choose from when selecting 1806 half dollars. The one in our current inventory is one of the rarest: a Pointed 6 and, on the reverse, with stems through claw.

These coins were engraved by the very first Chief Engraver of the U.S. Mint – Robert Scot. The obverse features Liberty with long flowing hair facing right. LIBERTY and the date are featured at top and bottom with 13 stars encircling the coin.

The reverse reveals a heraldic bald eagle design. The eagle as it holds arrows and an olive branch with its talon, our version shows the stems through its claw.

Silver half dollars from the Flowing Hair motif to the Draped Bust version to the Barber half dollars have attracted a large and active collector base. This outstanding specimen will appeal to numismatics of high quality rarities as well as those specializing in early half dollar varieties.

A Year to Remember

In 1792, Congress passed a law stating that American money must be made of gold, silver and copper. In the early years, the U.S. Mint used gold to create the $10, $5, and $2.50 pieces. The dollar, half dollar, quarter, dime, and half dime were made of silver and the cent and half cent were made of copper.