In many ways, the first dollar coin issued by the U.S. – the Flowing Hair Dollar – was a failure. The uninspired design was criticized by many and, as a result, the coin was only minted in 1794 and 1795. When the U.S. Mint prepared to replace the design with something new they were determined to get it 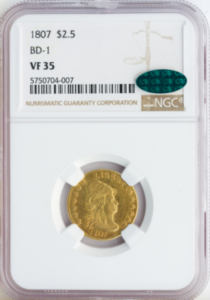 right. What followed was the creation of the Draped Bust coin.

The designers had certain parameters when conceptualizing the look of the coin. The design would need to include an eagle, the word “Liberty,” stars, and the words “United States of America.” The man behind the imagery of the coin was Robert Scot, the Chief Engraver of the United States Mint from 1793 to 1823. His original training was in watch making during his early years in Scotland. His work also included scientific illustrations like the 25 copper plates he engraved for a 1788 reprint of Natural Philosophy, a book by English chemist William Nicholson. The book explored the physical world and was, in some ways, a precursor to the more rigorous and scientific pursuit of biology and physics.

Scot later moved to Fredericksburg, Virginia where he began designing the look of that state’s currency. During this part of his career, he worked under then Virginia Governor Thomas Jefferson. Scot moved to Philadelphia shortly after Benedict Arnold and British soldiers burned Richmond. From this point forward his career and indelible mark on U.S. history took shape and by 1782 Scot was selected as the engraver for the Great Seal of the United States.

By 1796, Congress was prepared to move forward with a new design. The obverse would feature the profile of Ms. Liberty. Though no one is certain about the reference used for the woman, some believe that Scot drew inspiration from Ann Willing Bingham, a Philadelphia socialite. This may be due to the fact that she had a correspondence with Thomas Jefferson, who previously worked with Scot. Additionally, Bingham was a vocal advocate for greater inclusion of women in politics, therefore it is fitting for her to be represented on ubiquitous symbol of the U.S political identity.

The reverse side of the coin shows the traditional bald eagle image with arrows in one claw and an olive branch in the other. There are thirteen stars above the shielded eagle and a ribbon reading “E. Pluribus Unum.” In time, the national motto “In God We Trust” would replaced these words.

Due to the technical limitations of the time the coin occasionally contains variations and errors. In some instances the sizes of the letters varies, or overstrikes create differing reliefs. There are even error coins that feature only 15 stars despite the existence of 16 states during the time of minting.

Today the coin is a representation of how beautiful U.S. currency can be when a skilled designer and engraver meets the high standards of the American people.