The 1853 Seated Liberty Quarter was part of U.S. currency that began in the mid-1830s and extended to the late 1890s. The obverse shows the Goddess of Liberty grasping a pole. On the top of the pole is a Phrygian cap. This detail was meant to convey freedom. 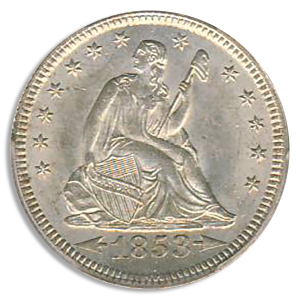 The cap is recognized by a distinct fold in the top. Originally, the hat signified the Roman goddess of liberty. In time, this symbolism later appeared in English and French art. While the cap is small piece of the imagery on the 1853 Seated Liberty Quarter, it carries meaning that looms large. In the early days of the United States, the cap was a powerful signal of anti-monarchical sentiment. Even the U.S. Army has used the cap as representation of freedom since 1778. In this context the cap is often seen perched on the tip of a sword.

The theme of liberty is also represented on a small, striped shield with the word “liberty” on the front. Liberty’s hand is caressing the shield to further draw attention to the symbolism. The shield is intended to convey that liberty must always be protected and defended whenever under threat.

The reverse design shows an eagle preparing to fly. Here, the striped shield is seen again. More symbolism is present with the olive branch of peace in the eagle’s right claw and a bundle of arrows in the left claw. It would not be until later in 1866 that the words “In God We Trust” were added to the coin.

The year 1853 brought significant changes to the design. An arrowhead appeared on both sides of the date shown on the obverse. Additionally, rays were added around the eagle on the reverse. These changes were not merely for aesthetic reasons. The U.S. Mint had changed the weight of the coin from approximately 103 grains to 96 grains. The intention behind the change was to discourage hoarding and melting of recently issued coins. The Mint needed a way to visually distinguish these lighter pieces from those that came before. The arrows and rays were the solution.

The rays were short-lived and only appeared in the 1853 version of the coin. The following year the rays were removed, resulting in a version with arrows only. More than 90% of the 1853 minting occurred in Philadelphia with the remaining minted in New Orleans.

While bold in its time, the imagery of the Seated Liberty eventually became the object of criticism. Many cited that the coin looked ordinary and uninspiring due to its minting for more than 50 years. Citizens saw it as merely commonplace. By 1891, a new design was approved, and the U.S. Mint adopted the “Barber Head” image. This replacement, however, was short-lived in comparison to the Seated Liberty coin given that it was only minted between 1892 to 1916.

The Seated Liberty design appeared on the half dime, dime, the quarter, the half dollar, and the silver dollar. The quarter versions are slightly scarcer than dimes or halves of the same date ranges.