1853: When the West Desperately Needed Coins - Blanchard and Company
My Account

In 1853, California was in the midst of the Gold Rush. The massive influx of people into California created a demand for money for use in daily commerce. 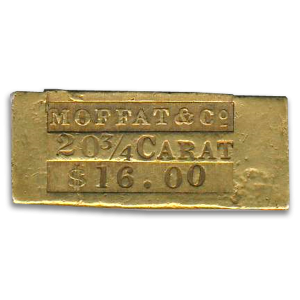 While miners pulled gold nuggets out of rivers and the ground, the raw gold was not effective as a medium of exchange.

There simply weren’t enough coins for people to conduct their daily business of paying for food, lodging, supplies, clothing or entertainment.

People who flocked to the West had a deep distrust of paper money. They wanted gold coins.

Back East, the official response to address the money crisis and the need for adequate coinage was slow.

Many coin collectors know that the United States Assay Office stepped in and began minting Territorial coins to supply the frontier area with an influx of gold coins into circulation.

Private Gold to the Rescue

What is less well known, is that prior to the US Assay office, so-called “private gold” was minted by companies in California, outside of the United States mint.

Private gold was circulated out of necessity in the rural West due to the coin shortages.

One of the largest and most prominent private gold coin firms: Moffat & Co. climbed to great importance during the Gold Rush Era.

Founded by New York metallurgist John Little Moffat, the firm developed an assay office, which was semi-official in appearance and character, despite having no official connection to the United States government.

In the summer of 1849, Moffat & Co. first produced small gold ingots. But, the locals did not favor these and the gold ingots never were accepted as a means of payment.

Trying again, Moffat used U.S. American gold coins as a model for some of his coins. Moffat & Co. employed Albrecht Kuner, a skilled Bavarian to create the dies for the five and ten dollar pieces .The dies were every bit as elaborate as official government coins. On the coronet of Liberty, the words Moffat & Co. replace the word LIBERTY, which was used in official United States government coins.

Moffat & Co. were in operations from 1849-1853. The firm sold its facility to the Treasury Department and in March 1854, the operation was reopened as a branch mint of San Francisco.

In 1854, a branch of the U.S. Mint finally opened in San Francisco to convert the miners’ gold into coins. By the end of that year, the San Francisco Mint produced $4,084,207 in gold coins.

Many gold Territorials and private gold coins were melted and turned into “official” gold coins.

Around the same time in history, the Pike’s Peak gold rush in 1858 was Colorado was underway. Nearly 100,000 gold diggers descended upon the mountain territory seeking their fortune. The famed “Fifty Niners” were the first to arrive at the site and quickly mined the easy-to-reach gold deposits.

The same problem emerged in Colorado that had plagued California just a few years before. More raw gold than cash.

Like Moffat, another private company in Colorado stepped in to fill the gap. In 1860, brothers who had made a fortune already by selling groceries and everyday articles to the gold seekers founded Clark, Gruber & Co. Bank & Mint. They famously issued “private gold” in the denominations $2.50, $5, $10, and $20.

The Clark & Gruber coins featured the symbol of the Colorado gold rush on their coins: Pike’s Peak. The firm continued minting private coins until 1863 when the U.S. Treasury bought the firm.

The private gold coins that survived are exceedingly rare and prized by collectors around the world. The surviving private gold coins, like this one are bursting with history of a dramatic and exciting era in Western gold rush history. Imagine the stories this coin would tell, if it could talk.