In early 1902, President Theodore Roosevelt made it a priority to update and improve the look of U.S. coinage. However, there were constraints that prevented even the president from getting what he wanted. An earlier 1890 act of Congress made it a requirement that all U.S coins remain in circulation for 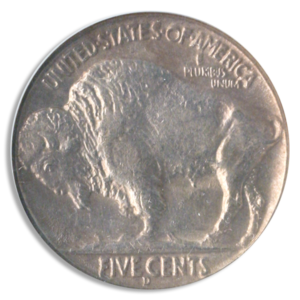 a minimum of 25 years before they became eligible for a redesign. However, within the verbiage of that act was a path forward for the president; Congress was empowered to authorize a change which would allow for an exception to the rule. As a result, the five-cent and the silver dollar pieces both became exception cases.

The Mint began seeking new designs for the nickel. American sculptor James Earle Fraser advocated for a new look, with one side of the nickel featuring a Native American, and the other a bison. In addition to this imagery, it was decided early in the process that the design would be free of any elements that were not required. Therefore, the words “In God We Trust” were omitted from the coin.

The Mint issued the first coins to Native American chiefs. Then in early March 1913, the coins were released into circulation. The design earned early praise for expressing imagery that is uniquely American. Some, like the New York Times criticized the way in which the design would quickly deteriorate as it flowed through the natural course of circulation. Despite these comments, the coin enjoyed a massive issuance in the tens of millions of pieces.

As with any coin distributed in such numbers, there were some unforeseen problems, one of which has become infamously known as the 1937-D “three-legged” nickel. In this version, one of the buffalo’s legs is missing. The error was a result of alterations made to the die used in the Denver Mint. The pressman was attempting to clean portions of the reverse die that had resulted in both dies coming in repeated contact with one another. The unintended result of this work was that one leg was nearly erased from the die.

Officials did not notice the mistake until the coin had already been struck thousands of times. Many of the three-legged pieces found their way into circulation before production was halted. As expected, collectors were intrigued and, to this day, seek this error version of the coin.

In the years since the die error, the Buffalo Nickel has enjoyed a legendary status for both the uniqueness of the missing leg and its rarity. The image of a Native American remains one of the most powerful characteristics of the coin due, in large part to the work and detail Fraser put into the piece. In fact, this coin was the last one to feature a Native American until the Sacagawea dollar minted in 2000. In previous remarks Fraser noted that the profile of the Native American on the coin was a composite of Iron Tail of the Ogala Lakota, and Two Moons of the Cheyenne.