On a late January morning in 1848, James. W. Marshall spotted flakes of yellow metal at the bottom a stream at Sutter’s Mill in Coloma, California. The shining substance, of course, was gold. 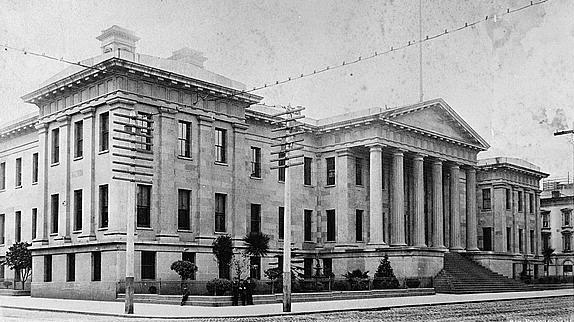 Despite the mill owner – John Sutter’s – attempt to keep the gold discovery a secret, the news spread like wildfire and as many as 300,000 gold-seekers descended upon the area over the next seven years.

out of the ground during the California gold rush.

Moving the Gold from California to the Philadelphia Mint

Henry Wells and William Fargo, saw huge opportunity and founded a banking and express transportation:  Wells Fargo & Co. in 1852. They quickly established offices in San Francisco and near most of the major gold mining towns.

Wells Fargo began transporting gold from California to the Philadelphia Mint by stagecoach.

“I wish you and Nellie could see the coach that brought us to Bodie. It is a four-horse Concord stage. A shotgun messenger, with a sawed-off shotgun, sits up on the high seat in front with the driver. He has the Wells Fargo Express box between his feet. Going out it is full of gold bullion; coming in it is full of gold coin.”– From Doctor Nellie, the autobiography of Helen MacKnight Doyle, M.D., 1879.

The United States Mint became overwhelmed with the massive job of turning that gold bullion into coins. Transporting it to Philadelphia was not only time-consuming, but dangerous, as no railroads existed yet.

Thus, President Millard Fillmore in 1850 asked for the creation of a California branch of the United States Mint. In 1852, Congress approved the plan and the San Francisco Mint opened in 1854. The mint quickly outgrew its first facility, resulting in a new mint in 1874, affectionately called “The Granite Lady.”

Facts about the San Francisco Mint

These are just a few of the prized San Francisco Mint coins.

What’s The Next Coin You Want to Own?

If there is a particular coin or set that you are trying to build, Blanchard has tremendous reach and respect within the rare coin industry

Do you have a wish list? Don’t see that coin on our site? Call Blanchard today and our numismatists can help source your wish list from collections around the world.