For thousands of years humans buried, hid, and hoarded coins for a variety of reasons. In ancient times, people buried coin hoards during wartime to preserve and protect their wealth from enemy invaders. Today, there are still ancient coin hoards being found in the Mediterranean region dating back to 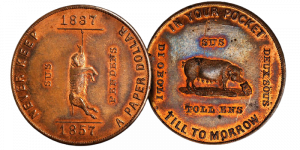 the Greek and Roman eras.

In early American life, people who distrusted banks or paper money hid their coins, preferring to store their life savings at home or in a nearby location.

People who buried coins generally planned to come back and retrieve the treasure, yet that wasn’t always possible – due to illness, death, or some other unforeseen circumstance.

Fast forward to today, and the discovery of a coin hoard is still an exciting numismatic event. It creates opportunity for collectors to obtain a rare coin, perhaps even in mint condition. Today we’ll explore the history and intrigue behind five famous coin hoards, starting with a recent hoard set to go to auction this October, to historical standouts.

But, be aware, the below list is just a drop in the bucket. There have been uncountable coin hoards throughout history – and who knows how many there remain to be found.

After living in their North Yorkshire home for 10 years, a couple decided it was time to renovate their 18th century home. In July 2019, they discovered the surprise of a lifetime under their kitchen floor: over 260 gold coins dated from 1610 to 1727, which are now slated for auction in October and are valued at around $290,000.

The couple found the coins buried eight inches under their kitchen floor in a stoneware cup about the size of a soda can. It took several years before the couple could cash in on their coin hoard, as there was some legal back and forth with the British government, who ultimately decided the residents could keep the coins.

It is believed that these coins belonged to Joseph and Sarah Fernley-Maisters, who were married and lived in that home in 1694. The Maisters were an affluent mercantile trading family for two hundred years. However, their family line petered out after the couple died, which could be why the coins were never found.

2013: The Mystery Behind the Saddle Ridge Hoard

It was just about 10 years ago that the largest discovery of buried gold coins ever recorded in the United States was found in California. In 2013, a married couple walking their dog on their rural California property spotted a rust-covered metal can partially visible in the dirt. Upon further exploration, they unearthed the first gold coin of many. The 1,427 gold coins minted from 1847 to 1894 were valued at an incredible $10 million. Most of the coins were $20 gold pieces minted in San Francisco after 1854, during the gold rush period. The coins are in near perfect condition, which suggests they were never in circulation.

Today, no one knows who buried these gold coins or why. Most likely, a wealthy person who distrusted banks buried their coins there, but died before they could tell anyone where it is. We will likely never know the truth.

This incredible hoard of 1908 “No Motto” $20 St. Gaudens gold Double Eagles was one that was hidden in plain sight! These coins were safely ensconced in a Nevada Wells Fargo Bank vault – and were discovered in original condition and apparently untouched since 1917. Official records reveal that these gold coins were intended for a World War I debt payment, but apparently were long forgotten deep in a bank vault corner for over 80 years.

The Wells Fargo hoard is remembered not only for its size, but also for the outstanding condition of the coins that were found: all coins were Mint State. These $20 St. Gaudens were offered on the market and sold between 1997 and 1999.

The story behind the Binion hoard has all the ingredients for a TV docudrama – yet is was a real-life story: a gambler, a stripper at a Las Vegas club, a love triangle and ultimately murder. We’ll let you watch the Court TV documentary for all the gory details. Here are the basics.

Ted Binion was the youngest son of casino tycoon Ben Binion, who opened the Binion’s Horseshoe Casino in Las Vegas in 1951. Son Ted grew up working different jobs at his father’s casino and was well-respected for his gambling acumen. Later in life, however, he began associating with a rough crowd, which ultimately led to the loss of his casino license and to nefarious circumstances surrounding his death. In the wake of Ted’s passing in 1998, law enforcement officials discovered a 12-foot deep vault on his property in Pahrump, Nevada, which held roughly $7 million in treasure including over 100,000 Morgan and Peace silver dollars.

For collectors, this opened the door for a once in a lifetime chance to obtain rare silver coins with a dramatic story behind them.

The last hoard we will discuss today was built by Aaron White. He was a Connecticut attorney, who worried that the financial strain of the Civil War could bankrupt our country and that all government-issued paper money would become worthless with no value.

To protect against such dire circumstances, White hoarded hard money (gold and silver coins) – like many other Americans did during that era. He famously struck his own token with the words on it:  “Never Keep a Paper Dollar In Your Pocket ‘Till Tomorrow.”

Even today, people still hoard coins. And, anyone could experience the thrilling discovery of finding a coin hoard.