If you make an error at your job, you may get a gentle reminder or a stern reprimand. But, rarely does the error make your final product more valuable. 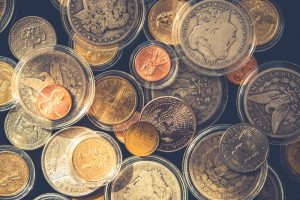 Not so, if you are in the coin minting business.

In fact mint error coins and misstrikes typically hold a higher value than a coin in its intended condition. Some of the rarest error coins are worth $75,000 or even more.

Collectors value error coins according to their scarcity, and price is determined by supply and demand. The fewer mis-strike or mistake coins that were minted, the more valuable those coins are today. Are you wondering what these valuable rare coins are? Before we dive in, let’s define some terms first.

A planchet is a blank disc of metal, which could be steel, silver, gold or more, which is created for coinage.

An off center coin is one that was incorrectly centered and part of the design is missing. These errors occurred when the planchet was not inserted into the press correctly.

A wrong planchet coin was created when a coin was struck on a planchet meant for another denomination or the wrong type of metal.

A defective die coin reveals raised metal from a crack in the die.

3. 1976- D Washington quarter. This double strike is notable due to “off-center” strikes on both sides of the coin.

4. 1923 Peace dollar. This double strike formed when the coin was struck about 45% off center, but then re-positioned and struck a second time.

5. 1977 Jefferson nickel struck on a 1976 Lincoln cent. This is a “double denomination” error (nickel and penny) and both dates are visible on the coin.

These error coins are valued from a few thousand dollars to $75,000 or more.

Plugging up the Error Coin Supply

Errors of many kinds are evident on U.S. coins since minting began. However, a new production process started in 2002 which nearly eliminated these coins from going into circulation. A new delivery system was put in place for coins. Coins directly go through automated counters which filter out imperfect coins. Very few mint-made error coins have hit the market since 2002. The static supply of error coins increases the value of these early error coins even more.

If you are in search of a specific coin, let us know. Blanchard and Company has tremendous reach and respect within the rare coin industry.  If there is a particular coin or set that you are trying to build, our numismatists can help source your coins from collections around the world.

Do you have any error coins? Or, is there a coin that you’d love to have in your collection? Tell us about it!