Do you own any key date coins? If you do, you understand the feeling of triumph, pride and excitement of adding a key date coin to your collection. Key date coins are those with a low mintage or with mintages with few survivors and they are prized in the world of numismatics.

The performance returns of key date coins have historically outpaced gold bullion and other rare coin markets. It comes down to supply and demand. Key date coins are one of the scarcest markets in all of tangible assets. At the same time, they offer all of the intrinsic benefits of gold. While key date gold coins are more expensive than common date rare coins, their excellent historical performance has more than justified the purchase price for countless numismatic investors.

Let’s dive in and explore five of the “rarest of the rare” key date coins in the numismatic world. 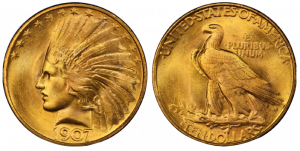 The United States Mint struck Indian Head Eagles – a $10 gold piece – regularly from 1907 until 1916 and then irregularly until 1933. However, numismatists covet the 1907 $10 Rolled Edge key date of this spectacular series.

The obverse and reverse were designed by Augustus Saint-Gaudens, considered by many to be the greatest modern sculptor known today.

The Rolled Edge variety was actually struck in rather large quantities for circulation but they were melted before ever being released to the public. The surviving examples are mostly high quality and were either saved as assay pieces or obtained directly from the Mint prior to the decision to melt the issue.

Experts believe that a mere 40 to 45 specimens exist today. Owning one of these coins would be a treasured highlight for any numismatics’ collection. 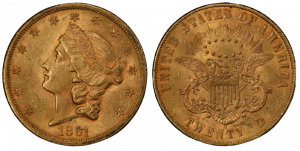 A telegraph was sent to the San Francisco mint ordering a return to the James Barton Longacre style. However, the telegraph apparently was not transmitted quickly.

By the time the news reached the San Francisco mint, $385,000 worth of the new reverse 1861-S Double Eagles had been struck and released into circulation!

The 1861-S Paquet key date is truly the rarest Liberty Head Double Eagle produced by the San Francisco Mint. It would indeed be an incredible achievement to add one of these coins to your collection. 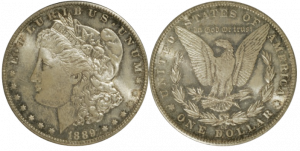 This key date coin can in part be attributed to the presidency of Democrat Grover Cleveland. President Cleveland strongly opposed the coinage of silver dollars and in 1885 the Carson City Mint was closed for coinage operations.

The Carson City Mint received a new lease on life with the election of Republican Benjamin Harrison as president at the end of 1888. When the mint reopened in the third quarter of 1889, crews had to clean the offices and machinery before production could begin. As a result, the mint only had time to produce 350,000 coins in 1889, and all of these coins came out in the last three months of the year. The 1889-CC Morgan dollar was one of the lower mintage issues of the entire series.

To make matters scarcer, an estimated 250,000 to 325,000 1889-CC Morgan Silver Dollars were melted – for reasons that are unclear today. While the mystery remains, that ensured the 1889-CC Morgan as a key date for any collector of a set of Morgan Dollars. 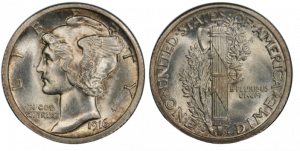 Commonly known as the Mercury dime, the Winged Liberty Head dime is one of the most popular U.S. coins in numismatic history. How shall we put it? The dime was not one of the Denver Mint’s priority denominations and so begins the story of how this key date coin emerged.

In late November 1916, the Denver Mint received a large rush order for 4,000,000 Barber quarters. In order to meet that order, the Denver Mint immediately halted the production of dimes. At that time, only 264,000 Mercury dimes had been struck.

Thus, a legendary key date issue was born. These few coins were primarily distributed in Montana and the Upper Midwest that November. At that time there were not many active coin collectors in that geographic region, which meant most survivors saw extensive circulation before they were found by numismatics.

The highly significant 1916-D Mercury Dime specimen is highly sought after and would be a standout achievement for any investor to add to their personal collection. 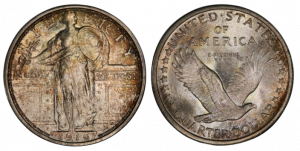 The 1916 Standing Liberty Quarter Dollar boasts one of the lowest mintages of any coin struck for circulation during the 20th century.

Today? It is estimated that only 500 specimens remain in grade 60 or higher, with a mere 50 in the grades 65 or better.

Key dates are often a focus for advanced rare coin investors. They seldom surface in the marketplace and when they do they don’t stay on offering for long. Demand is always strong for these legendary key date coins