A Good Gun, a Good Horse and a Good Wife - Blanchard and Company
My Account

Born in 1734 near Reading Pennsylvania, Daniel Boone had all the ingredients for a happy life.

“All you need for happiness is a good gun, a good horse and a good wife,” Boone said.

Yet, the father of 10 children with his wife Rebecca, had a taste for adventure and wanted to explore the American frontier.

Boone, along with 30 woodsman blazed a 200-mile trail through rugged wilderness and into the area that became Kentucky and is most famous for his exploration and settlement of that area.

The Missouri Centennial half dollar features this American folk hero, who lived in Missouri for the last 25 years of his life, on both the obverse and the reverse of the coin. 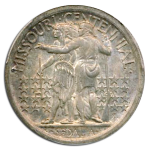 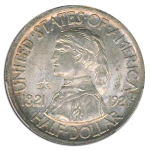 This handsome coin celebrates the 100th anniversary of Missouri’s admission into the Union in 1821.

The Missouri Exposition Committee planned a large Exposition and State fair in 1921 and wanted a commemorative coin to help fund the extravaganza. Congress authorized the striking of up to 250,000 Missouri Centennial silver half dollars.

Today, known simply as “Missouri’s” among collectors, these coins are the rarest of all the silver commemorative series and highly sought after.

Robert Aitken, the designer of the Panama-Pacific fifty dollar gold piece was chosen to craft the Missouri half dollar.

The obverse features a striking bust of famous frontiersman Daniel Boone wearing a buckskin shirt and a coonskin cap. The reverse reveals Boone with rifle and powder horn, and a Native American with the words “Missouri Centennial” encircling the top and “Sedalia”, the location of the 100th anniversary exhibition on the bottom.

The Philadelphia Mint struck only 50,000 Missouri half dollars in July 1921, yet many of these exquisite coins were melted down.

Increasing the interest to collectors, 5,000 of those added a star with 2 and 4 on either side to signify that Missouri was the 24th state to gain admittance to the Union.

This is an ideal coin for numismatics working toward a complete type set of commemorative half dollar series, residents of Missouri or anyone with a love of early American history.

We have only one of each variety.  If you are interested act fast, these gems aren’t expected to last long.

Enjoying our rare coin stories? Sign up for our newsletter here and get these, along with market news and investing advice straight to your inbox!