A Man, A Plan, A Coin: The Oregon Trail Commemorative Coin - Blanchard and Company
My Account

For many, the Oregon Trail evokes thoughts of untouched terrain, the untamed wild, and new beginnings. The reality was much different. Many lost their lives traveling the 2,170 miles spanning the distance of Kansas, Nebraska, Wyoming, Idaho, and Oregon. It is estimated that 20,000 people lie in unmarked graves. The journey was long, and the stakes were high. No one knew this better than Ezra Meeker. 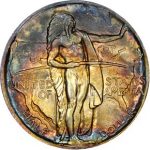 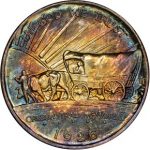 As a young man, Meeker traveled the Oregon trail by ox-drawn wagon. He began in Iowa and made his way to the Pacific coast. The journey was six months of hardship. Later, in his adult years he built his fortune growing hops for use in brewing beer. However, an aphid infestation in 1891 destroyed his crop and much of Meeker’s wealth with it. What followed were a series of attempts, largely unsuccessful, to rebuild his wealth.

In his later years he came to see that those who had risked their life on the trail, and those who died, were being forgotten. He resolved to restore the nation’s memory of the trail. As an old man in his late seventies he set out again by wagon to retrace the journey he made as a boy.

Meeker’s return to the trail did, in fact reinvigorate the nation’s resolve to commemorate the many who braved the journey. Many living in Idaho came to share Meeker’s interest in preserving the memory of the trail. Moreover, they wanted to preserve Fort Hall, a way station that had been part of the trail. Soon, the idea of an Oregon Trail commemorative coin became popular and Meeker became a driving force in making the project a reality.

In 1926 Washington Congressman John Franklin Miller introduced a bill authorizing the minting of the Oregon Trail Memorial half dollar. Eventually, Meeker testified before the House Coinage Committee. His influence was powerful and the bill passed with unanimous consent.

Officials selected the husband and wife team of James Fraser and Laura Gardin Fraser to create the look for the coin. The two had previously designed various coins for the US Mint. James sought to design one side of the coin while Laura designed the other. James’ design depicted a Conestoga wagon like so many seen on the trail during its early days. The image shows two oxen pulling the wagon with a blazing sunset in the distance. The five stars on the bottom of this side are believed to represent the five states and territories early Oregon Trail travelers would have traversed in their journey. The reverse side shows Laura’s design of a Native American with an outstretched arm gesturing peace.

By 1926 the Philadelphia Mint was ready to get to work. They struck 48,000 coins with Meeker anxiously standing by. He was eager to take the coins on the road and sell them for $1 each. Meeker’s plan was to use the proceeds from the sale to fund another commemorative project: historical markers along what used to be the Oregon trail. The coin became the first commemorative issue to be struck at more than one mint after the San Francisco Mint issued an additional 100,000 coins.

Meeker led a long and meaningful life reaching the age of 97. His last journey across portions of the trail was by plane in 1924. The pilot of those flights, Lt. Oakley G. Kelley, had earned the first nonstop transcontinental flight record just one year earlier when he flew from New York to San Diego without refueling. In 1928 the US Mint issued an additional 50,000 coins and another 17,000 in 1933.

Are you looking for a specific rare coin to add to your collection? We have a great selection and are always happy to help you find exactly what you need. Give us a call anytime!

Sign up for our newsletter and get more rare coin stories delivered straight to your email!