U.S. Bureau of the Mint Chief Engraver Charles E. Barber designed the famed Barber coinage which includes a dime, quarter and half dollar. And, Barber dimes were struck from 1892 through 1916. 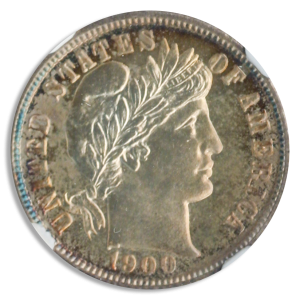 This beautiful silver coin features Lady Liberty facing right on the obverse. UNITED STATES OF AMERICA encircles her head. The date is found below Lady Liberty’s bust. The dime’s reverse reveals a delicate and ornate Laurel wreath wrapped around the coin’s denomination: ONE DIME in the center.

There was no room for the motto IN GOD WE TRUST on the Barber dime. So, Barber left it off. Barber did find room to include the motto on the quarter and half dollar designs.

Another difference? One legendary numismatist wrote this about the Barber dime:

“It is not generally realized that the obverse design of the dime differs from that of the quarter and half dollar, in that the latter denominations have stars around the obverse periphery.”

In 1900, the U.S. minted over 17 million Barber dimes at the Philadelphia Mint. Only 600 proofs were struck. Survival estimates of all grades of 1900 Barber dimes are less than 1,000. See this delightful 1900 Barber dime proof, with a smattering of orange-apricot iridescence sparkling at the rims here.

You can see this great Barber Dime here.