Cashing In On Controversy: The Strange History of the 1909-S VDB Lincoln Cent - Blanchard and Company
My Account

Never before have three little letters meant so much. 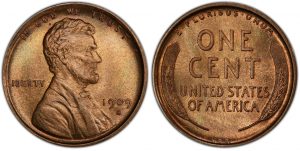 The 1909 Lincoln cent – designed to replace the Indian Head penny – was welcomed by Americans with enthusiasm, before quickly being discontinued due to one small detail.

Then President Theodore Roosevelt believed that US coins needed new imagery that would inspire Americans. At this same time, he found himself intrigued with the work of Lithuanian-born artist, Victor David Brenner. While meeting with the artist to have his portrait painted Roosevelt noticed Brenner’s relief sculpture of Lincoln and was instantly impressed.

He was not only taken with the quality of the work but also the subject. Roosevelt had long revered Lincoln and considered him a hero. Around this time Roosevelt got the idea to design a new penny showing Lincoln in Brenner’s style. The timing was perfect as Lincoln’s 100th birthday was approaching. This would be the first everyday US coin to feature a person who existed.

By August of 1909 the coin was ready to be released to an eager American public. Long lines formed as enthusiastic collectors waited for their turn to buy the coin. Part of this excitement may have come from pent-up demand as the pennies were to be released in June, but then were delayed when President Taft demanded that the words “In God We Trust” be included on the coin above Lincoln’s head. Americans loved the design.

But one man didn’t.

That man was Secretary of the Treasury Franklin MacVeagh. After the coin was released to the public he became aware of one small detail that he didn’t recognize earlier: the artist’s initials, “V.D.B.” appeared at the bottom of the reverse. He didn’t like this decision.

Just four days after the coin was released the Washington Post published an article announcing that the coin was doomed due to this one design element. Soon after, there were reports of Americans rushing to buy more Lincoln pennies because they knew they would soon be unavailable and might grow in value due to scarcity.

The first wave of last-minute buyers were newsboys who were the first to see the announcement. It was not long before the discontinued Lincoln pennies were fetching 25 cents a piece. By November of 1909 all of the minted “V.D.B.” coins were in the possession of the public.

Officials redesigned the dies to omit Brenner’s initials. Eventually the mint reversed this decision and in 1918 they put Brenner’s initials back on the coin. This version placed the letters on the obverse below Lincoln’s shoulder.

In total, the Philadelphia Mint produced 27,995,000 VDB pennies and the San Francisco Mint produced only 484,000 making those in the series particularly valuable.

For many, the piece represents more than rarity, it also represents a new era in US coins when the real life figures of the nation’s history were elevated to a new status.