Evergrande, Counterparty Risk, and Gold - Blanchard and Company
My Account

In recent weeks, the crisis within Evergrande has reminded investors of counterparty risk. 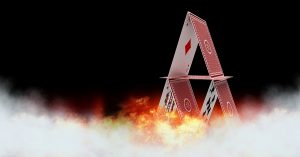 Evergrande is a towering example of counterparty risk. In August of this year, the Chinese property developer warned that it would default on their debts if they were unable to raise sufficient cash in time. This news sparked fear among investors. Those fears were confirmed the following month when Evergrande failed to make their off-shore bond payments of $83.5 million. In October, the company failed to meet three more payments totaling $148 million. These defaults have left many individual Chinese investors devastated.

In recent weeks, the company has attempted to remedy the problem by selling off assets to generate the capital necessary to stay afloat.

What makes this event so concerning is that it happened during a time when China appeared to be enacting a strict regulation intended to avoid these kinds of defaults. That regulation is called the “three red lines.” This refers to China’s attempt to limit how much a company can borrow based on three metrics; the company’s debt-to-cash, debt-to-equity, and debt-to-assets. Despite these regulations, Evergrande has vaporized the wealth of many Chinese households.

Many journalists have made comparisons to Lehman Brothers, which is a similar story of counterparty risk. In fact, Evergrande and Lehman Brothers have more in common than counterparty risk gone awry. Both entities were massive institutions. Both had the appearance of a monolithic corporation that could never fail. However, the fallout from both disasters is a reminder that counterparty risk is very real. When debts go unpaid, businesses fail and investors are left holding the bag.

Gold is free from counterparty risk. As a precious metal, it does not generate cash by meeting quarterly earning estimates or by satisfying debt obligations. The value of gold comes from its scarcity, global appeal, and application in jewelry and technology. Freedom from counterparty risk is a major benefit to long-term investors because over the course of decades we are all likely to experience at least some of the effects of this risk.

Consider that total global defaults on debt were $430 billion in 2008 during the worldwide financial crisis. That is what counterparty risk looks like when things go wrong.

The most threatening risks are often those that go unseen. Counterparty risk is a perfect example. It is quiet until it can no longer be silenced and when investors finally hear it, the sound is deafening.