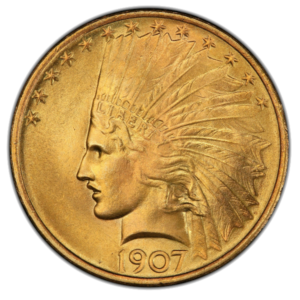 It was 1904 and the United States of America was finding its 20th century identity.

President Roosevelt felt that part of this emerging identity must acknowledge native Americans. It was then that he realized that the Liberty Head gold coin series had remained unchanged for more than 25 years. That length of time was important because it meant that he could alter the design without an act of Congress. It was then that he had the idea for what would later become the Indian Head Eagle. He remarked, “I feel very strongly that on at least one coin we ought to have the Indian feather headdress. It is distinctly American.”

By 1907, Roosevelt contacted sculptor Augustus Saint-Gaudens who began working on the design. Saint-Gaudens turned to one of his previous, unused works as inspiration; the statue of Victory in the William Tecumseh Sherman Monument in New York City. The profile would become the basis for one side of the coin. Saint-Gaudens modified the profile to include the beautiful headdress.

In sculpting the piece, he had to tread a fine line; he wanted a relief that was bold, but if it was too prominent it would not strike properly at the mint. It was not long after this design work was nearly complete that Saint-Gaudens died, leaving the coin as one of his lasting embellishments on the country’s national identity.

Soon other designers took over to complete Saint-Gaudens work. They reduced the relief slightly to accommodate the presses at the mint. They also added a rim to the coin, a thin, raised ring encircling the perimeter. This change was driven more by functional needs than artistic interests. Without the rim the coin was underweight and prone to coming off the dies with extrusions surrounding he edges.

Initially, the mint struck approximately 500 pieces using Saint-Gaudens original design. These pieces, which became known as “wire rim” pieces, were available for purchase from the mint until 1912. Today, they remain a rare collector’s item with one piece earning $230,000 at auction as recently as 2011.

Later, a much larger issuance of 32,000 coins were struck using the modified dies. However, new Mint Director Frank Leach decided to melt nearly all of these pieces, keeping only 50. This decision made the issuance exceedingly rare. As a result, one of these coins, a piece held within the Leach family, commanded $2,185,000 at an auction in 2011.

Eventually, the mint issued a new set. However, it was long after that the public began to vocalize their dissatisfaction with the decision to omit the words, “In God We Trust” on the eagle. The original decision to remove the words came from Roosevelt who believed such a design to be sacrilegious. The public’s reproach was strong enough to result in a bill from the House of Representatives which mandated that the words be included on the new eagle and double eagle designs. Soon after, President Roosevelt, under increasing pressure, signed the bill into law.

Today, the numerous versions of the 1907 $10 Indian coin are a reminder that new coin issuance’s are as much of an iterative process as the forming of our national identity.