The year was 1933. It was the height of the Great Depression. The average income of an American family had declined by 40 percent over the past four years. If you had a job you were one of the lucky ones. 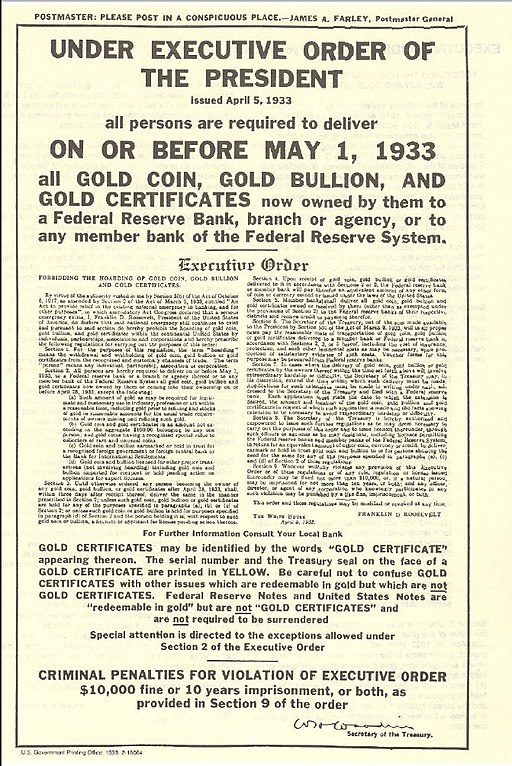 Bread lines and soup kitchens were common. It is estimated that half of all American children did not have enough food, proper housing or medical care during the Great Depression.

After losing their jobs and unable to pay their mortgage or rent, hundreds of thousands of Americans lived in shanty towns made of cardboard and sheets nicknamed Hooverville’s.  About 750,000 farming families lost their farms to bankruptcy. A full 20 percent of the population, or 15 million people at that time, were unemployed and could not find work.

It was the worst economic downturn to ever hit the industrialized world.

Paper Money Was Backed By Gold

The Rush to Hard Money

During the Great Depression Americans were converting their paper money for gold, which sparked a massive outflow of gold from the Federal Reserve. Individuals revealed their preference to hold physical gold over paper money.

After several waves of banking crises, the U.S. government decided one of the solutions to the economic crisis would be to make it illegal for Americans to own a significant amount of gold. The government wanted to inflate the money supply, but was unable to do that if Americans were hoarding significant amounts of gold.

This April marks the 85th anniversary of when President Franklin Roosevelt proclaimed it was illegal for Americans to own a significant amount of gold.

In March 1933, the Federal Reserve Bank of New York could no longer honor its commitment to convert paper money to gold and President Franklin D. Roosevelt declared a banking holiday. FDR issued an Executive Order requiring all Americans to surrender all gold owned by them to a Federal Reserve bank and prohibited the private holdings of all gold coins and bullion.

The now infamous Executive Order 6102 was issued on April 5, 1933, states: “I, Franklin D. Roosevelt, President of the United States of America… hereby prohibit the hoarding of gold coin, gold bullion, and gold certificates.” Prior to this executive order, gold certifications could be easily exchanged at banks for physical gold.

President Roosevelt ordered Americans to sell their gold back to the government, or face jail time and fines. Exemptions were made for coin collectors, dentists, artists, and jewelers, and average citizens could own up to $100 in gold coins.

In 1934, the Gold Reserve Act became law, which required all gold and gold certificates to be surrendered to the U.S. government.

Fast forward two more decades and another historic moment in the history of gold was seen in 1958. The Bretton Woods system became fully functional and included the stipulation that U.S. dollars were convertible to gold at a fixed exchange rate of $35 an ounce. The United States was required to keep the gold price fixed and adjust the supply of dollars in circulation to retain confidence in the gold convertibility system.

The Bretton Woods agreement had first been ratified by Congress in 1944 to establish a gold exchange standard and the IMF and the World Bank. The system was set up to rebuild the global economy towards the end of WWII.

In 1971, the balance of payments deficits made it impossible for the U.S. to fulfill its obligation to convert dollars to gold at that price. President Nixon officially terminated the U.S. dollar’s link to gold established under the Bretton Woods agreement.

In 1973, the United States devalued the dollar and major currencies were allowed to float freely no longer pegged to gold.

All during these decades, Americans were not allowed to own gold other than jewelry.

One of our company’s founders – Jim Blanchard rose to prominence as a supporter of American’s right to own gold in the early 1970s.

Jim Blanchard gained national attention when he arranged for a biplane to tow a banner proclaiming “Legalize Gold” over President Richard Nixon’s inauguration in January 1973. His lobbying efforts were a success and after more than 40 years, Congress once again legalized private ownership of gold bullion effective Dec. 31, 1974.

Throughout ancient history, gold and silver were prized for their intrinsic value. They remain hard physical assets, which have become even more valuable in our modern society. It is the right and privilege of every American to own gold in order to have a safe haven to protect, preserve and grow their assets. Perhaps it is even more important today than ever for all Americans to invest a portion of their assets in gold.