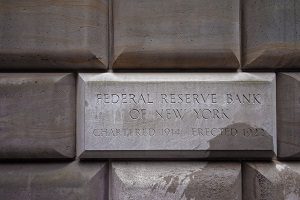 At the conclusion of its two-day policy meeting, the Fed kept its official interest rate at the rock bottom range from zero to 0.25% and did not signal a “tapering” of its monthly $120 billion  bond purchases that the Fed began last year to stimulate the economy.

Fed officials hinted that the central bank may pull back on its monthly bond purchases later this year. “If progress continues broadly as expected, the Committee judges that a moderation in the pace of asset purchases may soon be warranted,” the Fed said today.

The Fed also warned today that the U.S. economic picture won’t be quite as rosy as it forecast this summer.

In the months ahead, the Fed faces a number of key challenges and must attempt the delicate dance of normalizing monetary policy (raising interest rates), while trying to prevent a widespread stock market sell-off and downturn in the economy.

Stocks traded higher Wednesday, fueled by a continuation of the easy money policies. Yet the prospect for higher taxes, the debt ceiling standoff in Congress, and concerns about systemic contagion from China’s Evergrande crisis hang over the stock market. This week, Morgan Stanley said the stock market could plunge 20% as fiscal stimulus is withdrawn and economic growth slows.

Gold investors may remember the damaging political fight in 2011 over the debt ceiling limit. The impasse between Republicans and Democrats took our country to the brink of default, resulted in a credit downgrade for U.S. sovereign debt, sent the stock market plunging and gold soared to its then all-time high just above $1,900.

The current standoff between Republicans and Democrats in Congress over raising the federal debt ceiling remains a key risk on the horizon to the economy and the financial markets. There remains much uncertainty for the Federal Reserve, the economy and our nation’s credit rating in the weeks ahead.

Thankfully, as a gold investor, you can feel confident that your diversification into tangible assets creates certainty for you in an uncertain world. Gold has been a vehicle to grow and protect wealth for thousands of years. The confidence you get from owning gold is unmistakable. If you’d like to explore if your portfolio is properly diversified given the rising risk levels ahead, call your Blanchard portfolio manager to review your current allocation levels.