Financial Markets in Times of War - Blanchard and Company
My Account

The stakes have reached new heights. As Putin puts nuclear-deterrence forces on alert many are hoping the planned talks between Ukraine and Russia yield progress. 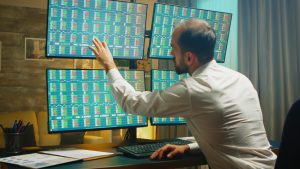 In an effort to hamper Putin’s invasion, the U.S. and many European countries have imposed sanctions against Russia. Recent moves directed at Russia’s central bank will dramatically limit the country’s ability to participate in the global financial system.

One key outcome of these measures is that the government will likely struggle to access their foreign exchange reserves. This would further diminish the value of the ruble. In this scenario Russian officials would need to find other ways to support their currency. Those options are limited.

This has left many people wondering what the international financial picture will look like in the coming days.

Reporting from the Financial Times suggests that the fallout might be confined to Russia and that “the direct exposure of western financial institutions to Russia is modest, partly due to sanctions imposed after its 2014 annexation of Crimea, as well as the rise of more investor-friendly economies in Asia.”

The authors explain that only 3.4% of MSCI’s emerging markets equity index is Russian-based. In the meantime, Russian citizens will face considerable difficulties as long lines form at ATMs and more people try to withdraw their funds from banks. This flurry of activity is likely to spur more fear leading to more withdraws. The result would be a run on banks.

While the most severe damage will be felt in Russia, many other countries will suffer to some degree from the recent move to ban Russia from the SWIFT international payments system. This decision will impact trade, given that Russia accounts for 10% of oil and natural gas production.

Other countries are likely to experience slowing growth and a continued rise in inflation. Production supply chains will suffer or in some cases come to a complete stop.

With so many influential factors in play many investors are uncertain about how to proceed through the fog of war. A look into the past might offer some answers.

Data from LPL Research shows that the Dow Jones Industrial Average fell by an average of 2% during 16 major events unfolding between 1990 and 2020.

Expanding the timeline offers even more perspective. The average total drawdown of the S&P 500 following 21 major geopolitical events since 1941 was 5%. Some of these events include things like the assassination of President John F Kennedy and the 9/11 terrorist attacks. The average amount of time the S&P 500 has needed to recover from those losses is just 45 days.

The road ahead is unclear but US investors should take a moment to remember that dramatic financial market movements are common during periods of upheaval. Fortunately, they are typically also short-lived.