Coin collecting is widely recognized as one of the most rewarding pursuits in the world. Once known as the “hobby of kings,” it is now called the “king of hobbies”.  As this review of the five most valuable coins in the world will reveal, it is indeed rewarding both personally and financially.

Coin collecting has its roots in the European Renaissance among wealthy Europeans. By the late 1590s coin collecting had become extremely popular among the nobility and the first known coin auctions were held in 1598 in Holland. Historically, collectors purchased rare coins for their historical significance and beauty, but as these collections fetched significantly higher values, investors began turning to rare coins as a new type of asset class for capital appreciation, diversification, non-correlation to stocks, and as a hedge against inflation.

Here is a list of the five most valuable coins in the world. 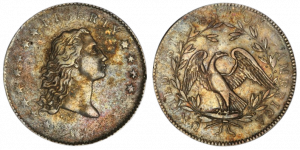 In 2013, a legendary PCGS SP66 Flowing Hair dollar sold for $10,016,875. Some experts believe this coin, considered to be one of the greatest American numismatic specimens ever, could be the very first silver dollar ever struck. This coin featured an earlier die state than any other known specimens and is the only one with proof-like fields.

In 1933, the U.S. Mint struck 445,500 Saint-Gaudens Gold Double Eagles with a face value of $20. After these coins were produced in 1933, President Roosevelt, took the United States off the gold standard in an effort to help the American economy out of the Great Depression.

All but 10 of these beautiful coins were lost to the melting pot. They never circulated. One of these stunning coins mysteriously landed in Egypt and into the collection of King Farouk, a voracious coin collector. When the renowned Farouk collection, totaling over 8,500 medals and coins, was sold in 1952, the 1933 Double Eagle went missing.

This extremely rare and infamous coin did not resurface until 1996 in the U.S. and was seized by the U.S. Secret Service. The coin was returned to the United States Mint as a result of the Department of Justice’s settlement of a forfeiture action and, in that landmark legal settlement, this one coin became the only 1933 Double Eagle that is legal to own in a private collection.

In 2011, Blanchard and Company made numismatic history by placing the famed Brasher Doubloon for a record $7.395 million with a Wall Street investment firm. The identity of the buyer was not disclosed. The coin, dated 1787, was graded AU50 by PCGS and has a green CAC sticker.

This historic rarity was minted by Ephraim Brasher, a goldsmith, and neighbor of George Washington. The 1787 Brasher Doubloon is the first American-made gold coin denominated in dollars. The U.S. Mint in Philadelphia didn’t begin producing coins until the 1790s, and in our nation’s earlier years, it was common to use foreign coins in everyday transactions. The beautiful coin contains 26.66 grams of gold — slightly less than an ounce.

At the time of the sale in December 2011, CAC founder and Blanchard partner John Albanese hailed the coin as one of the most iconic pieces in all of the numismatics and the holy grail of all collectible gold coins. And it still is. Only seven Brasher Doubloons in all survive, and the one placed by Blanchard is the sole specimen with the initials of its maker, EB for goldsmith Ephraim Brasher, punched across the breast of the eagle depicted on the coin. The other six specimens feature EB on the bird’s right wing.

Ahead of the sale, at Blanchard’s New Orleans headquarters, the doubloon sat sealed in a protective case on an office table surrounded by three armed guards. Elevators were shut off to the 19th floor of a downtown office building housing Blanchard’s offices, and doors inside the office were locked, CBS News reported at the time. The coin, which is smaller than a half dollar but heavier, was to be delivered by armored vehicle to the buyer over the weekend.

Blanchard & Co. remains proud of its part in the transaction: The Brasher doubloon indeed falls into the rarefied strata of coin collecting and remains one of the most valuable coins in the world today.

The Brasher Dubloon made history again in January 2021, when another specimen sold at auction for a mind-blowing $9.36M. 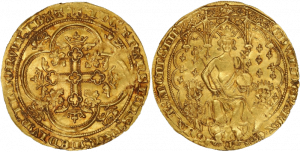 This coin is 679 years old and is thought to be one of only three of the same coins to have survived the centuries thus far. Two specimens of this extreme rarity are housed in the British Museum in London, both of which were found in the River Tyne in 1857. The third coin was found by a prospector with a metal detector in 2006 and was sold at auction in the same year. It’s now estimated that the coin is valued at around $6.8 million.

The front of the coin reveals King Edward III on his throne with two leopards’ heads on either side, while the reverse shows the Royal Cross inside a quatrefoil. Because of its design, the coin is also known as the Double Leopard. 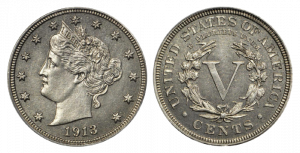 The renowned Morton-Smith-Eliasberg Liberty Head Nickel sold $4,560,000 dollars at auction in 2018. One of only five known specimens, this version is considered to be the finest known example. It was owned by Louis E. Eliasberg a legendary Baltimore banker and American coin collector. In 1950, Eliasberg completed his collection of every coin ever minted by the United States dating back to 1792. His sons eventually sold his famed collection for about $45 million.

Wondering about the advice Blanchard gives to coin collectors and investors? Always acquire the highest quality coin that fits in your budget and you will never be disappointed.