Gold and the Inflation Reduction Act - Blanchard and Company
My Account

Biden’s Inflation Reduction Act aims to promote clean energy solutions in the coming years. While the package is considerably smaller than the original $2.2 trillion Build Back Better Act it does represent the largest ever U.S. financial commitment to slowing global warming. 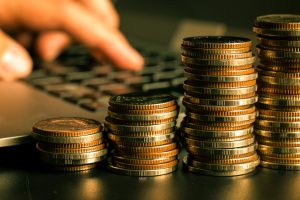 The bill calls for a $400 billion investment over a period of 10 years. The spending consists of tax credits that incentivize consumers to purchase electric vehicles while encouraging electric utility companies to adopt renewable energy sources. This aggressive plan seeks to cut emissions in half by 2030. The bill also aims to accelerate the production of solar panels, and wind turbines.

This step, while not enough to prevent dangerously high global temperatures, does break the inertia that has characterized previous actions meant to address global warming.

These moves have prompted the gold mining industry to reevaluate its future. In doing so, many have discovered ways in which gold extraction can in fact contribute to de-carbonisation.

Research from The World Gold Council concluded that the current plans of the gold mining industry suggest that we could see a 35% drop in the emission intensity of power used in gold production. This reduction is possible due to an increasingly de-carbonised electrical grid.

These findings have major implications for the global climate because mining is estimated to use up to 11% total energy consumption. Moreover, the resources needed to satisfy consumers are growing rapidly as seen by the 50% increase in demand for gold over the last 22 years. It’s not surprising that the volume of gold mine production has increased by 33% over that same period. Serving this demand means that the mining industry will need to move fast in its adoption of green technology.

Reducing the emissions from mining depends heavily on the changing composition of sources involved in the grid power mix. Consider, for example, that as of 2019 coal represented 25% of grid power in gold producing countries. Global research firm Wood Mackenzie estimates that this figure will drop to 18% by 2030.

The same body of research forecasts that solar will grow from 4% to 11% in 2030, and that wind will grow to 8% from today’s figure of about 1%. Put simply, as the power grid begins to draw from greener sources the gold industry contributes far less to the global warming problem.

This research and Biden’s latest bill illustrate an important truth about overcoming the threat of global warming: making meaningful progress will require a combination of legislative acts and market forces.

Fortunately, as of this year it appears that both are in play.

2 thoughts on “Gold and the Inflation Reduction Act”