“You have not lived today until you have done something for someone who can never repay you.”― John Bunyan 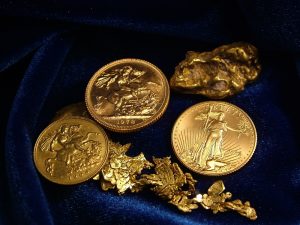 Each year at Christmas time, generous donors around America walk up to a Salvation Army Red Kettle and drop a gold coin in as a donation. It makes headlines each December, when the “first gold coin” donation is excitedly found.

Last year, on a cold and snowy night in late December in Green Bay, Wisconsin, a benevolent soul was busy making his or her own Christmas miracle. On Thursday December 22, 2016, a donor dropped a total of 40 coins into six different kettles. On Friday, December 23, the donor repeated the magic, dropping 40 more gold coins into Salvation Army kettles in Manitowoc County, Wisconsin.

This is a recurring theme for the Salvation Army. You may have heard of the mystery of the gold coins that kept appearing each December in a small town in Gettysburg, Pennsylvania. For years, a shiny South African Kruggerand kept appearing in the bell ringer’s buckets. For 15 years, the benefactors managed to keep their identity hidden, which was a feat in and of itself in a town of less than 8,000.

In December 2012, the donors fessed up. “It made us feel good to give,” said Dick Unger.

Unger had bought six South African Krugerrands in the 1980s as an investment: one for each of his four daughters, one for himself, and one for Ruth Jean. After keeping them in his safety deposit box for years, he was inspired to drop them into the Salvation Army bucket with no note or hint to their identify.

Even after Unger donated the original six gold coins. He wanted to keep up the tradition. He bought more to donate. As the price of gold skyrocketed, his donations became worth more and more. In 1997, the coin Unger slipped in the bucket was worth $287. As gold prices climbed to their all-time highs in 2011, the coin was worth $1,700, reported Priority, the magazine of the Salvation Army.

In 2014, in Libertyville, Illinois, another generous well-wisher dropped seven gold coins into a Salvation Army bucket outside a Jewel grocery store along with a note. Those coins were gold Swiss Francs each made up of .19 ounces of gold. That donation was valued at about $1,500, the Salvation Army said.

These heartwarming stories make a real impact. Nearly 70 percent of the Salvation Army’s funding comes from donations dropped into the red kettles during the holiday season. The Salvation Army’s Red Kettle Campaign is the largest and oldest charitable fundraiser of its kind in the United States. It started in 1891 in San Francisco.