Gold climbed to a seven-week high this week – boosted by weakness in the stock market, signs that inflation is emerging in the U.S. and amid strong demand from India and China for physical bullion. 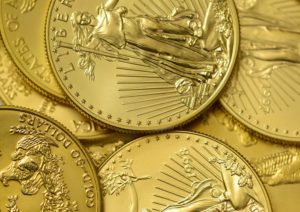 The short-term trend turned positive for gold last week as the yellow metal climbed above its 50-day moving average – a bullish investing signal that confirms the end of the recent pullback in gold prices.

Looking higher, precious metals investors are targeting near-term gold gains to $1,825 an ounce – which represents a technical chart objective based off the March lows.

The macroeconomic picture remains positive for gold as inflation data is coming in hotter than economists expected, which supports a gold move back to the all-time highs above the $2,000 level hit last summer.

What’s brewing now? In March, the consumer price index jumped 2.6% from a year ago levels, the Department of Labor reported last week.

We’ve been warning about the inflation seeds the government has been planting for a while now. Get ready. It’s starting to heat up – and once inflation boils – it is hard to contain without crashing the economy.

It turns out that JP Morgan Chase chief executive Jamie Dimon is deeply concerned about the future of America.

While Dimon expects a boom from pent up demand, there is a chance that a rise in inflation will be “more than temporary,” forcing the Federal Reserve to raise interest rates aggressively.

What’s more? “Rapidly raising interest rates to offset an overheating economy is a typical cause of a recession,” Dimon wrote in his recent letter to shareholders.

Dimon compared the Covid-19 crisis to past difficult periods for our country, Dimon said that we have always bounced back stronger as a nation.

“In each case, America’s might and resiliency strengthened our position in the world, particularly in relation to our major international competitors,” Dimon said. “This time may be different.”

Here’s another way to look at the inflation problem.

In 2020, the U.S. Treasury created 23.6% of all U.S. dollars that are in existence. The government printed gobs and gobs of money in its efforts to flood the country with liquidity during the Covid crisis.

And, you wonder why the U.S. dollar is going down?

The Fed has put all its chips on the table and is gambling with our future. The Fed risks that inflation will not only pick up – but get out of control.

The next economic shock is brewing and it is an inflation crisis.

The remedy for hyperinflation is painful indeed. What can we learn from history? In the late 1970’s and early 1980’s inflation hit 14% and mortgage rates spiked as high as 20%.

In a classic article in Fortune magazine in 1977, legendary investor Warren Buffett stated his views on inflation:

“The arithmetic makes it plain that inflation is a far more devastating tax than anything that has been enacted by our legislatures. The inflation tax has a fantastic ability to simply consume capital. … If you feel you can dance in and out of securities in a way that defeats the inflation tax, I would like to be your broker — but not your partner.”

The 1970’s are considered a lost decade for the stock performance.

Between 1970 and 1979, the Dow Jones industrial average gained just 4.8 percent. That’s right…not even a 5% return over nine years!

Always be thinking about tomorrow, especially when the pace of change picks up.

The inflation data is picking up fast. The warning bells of inflation are ringing.

The tide is turning bullish for gold again.

Momentum is picking up for gold bulls as the U.S. stock market stumbles, the U.S. dollar weakened steadily throughout April and the price of bitcoin dropped as well.

If you want to protect your assets from a falling dollar and rising inflation, increase your allocation to gold now – before the price goes up even more.