The U.S. Stands at a Dangerous Tipping Point. 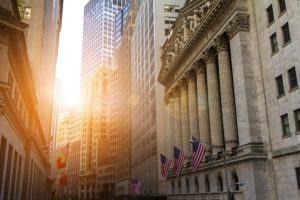 As gold spiked to a new all-time record high this week at $1,960 an ounce, Wall Street investment bank Goldman Sachs warned the U.S. was at risk of losing the dollar reserve currency status.

The U.S. dollar’s century-long reign over the world economy faces a looming threat as China’s renminbi strives to become its successor.

These are not fringe or conspiracy concerns – but are being put forth by some of the brightest and most successful minds in our country today – and are helping gold soar to new all-time highs.

“Gold is the currency of last resort, particularly in an environment like the current one where governments are debasing their fiat currencies and pushing real interest rates to all-time lows,” wrote Goldman strategists including Jeffrey Currie. There are now, they said, “real concerns around the longevity of the U.S. dollar as a reserve currency.” – Bloomberg, July 28, 2020.

Yet, many warn the U.S. is blatantly mismanaging its finances and its currency – as we allow our government debt to skyrocket to an all-time high at $26.5 trillion (up from $19 trillion four years ago), run a zero-percent interest rate policy and continue to print trillions of new dollars at an astonishing pace.

“In the 1960s, French Finance Minister Valéry Giscard d’Estaing complained that the dominance of the U.S. dollar gave the United States an “exorbitant privilege” to borrow cheaply from the rest of the world and live beyond its means. ” – Foreign Affairs, July 28, 2020

Sometimes it’s useful to look at what’s happening here in our country – from an outsider’s view. Here’s how the Australian newspaper, The Sydney Morning Herald, described the situation:

“What’s occurring is a loss of faith in the US economy, its political system, its competency and in its commitment to the post-war role it has played in the world’s affairs. America’s squandering of its global leadership and its rapidly deteriorating public finances provide no reason for the rest of the world to maintain the faith [in its economy].- July 29, 2020

Countries use U.S. dollars for world trade – for now.

Other countries around the world need U.S. dollars in order to conduct foreign trade. So, they buy dollars. For example, if Brazil wants to buy BMWs from Germany – they need to conduct that transaction in U.S. dollars. The vast majority of world trade is invoiced in US dollars. For now.

This gives our nation a tremendous financial advantage and has allowed our government to finance $26.5 trillion of debt at ultra-low interest rates.

Losing dollar reserve status would be death knell for US.

Just think what would happen if no one needed to buy dollars or U.S. death any more. We could no longer finance debt at 0%.

What would that mean for you and me?

It’s no surprise in this environment, gold is soaring to new all-time highs. Gold, is the ultimate safe-haven, the currency of last resort, and a hedge against inflation due to limited physical supply.

America is a debtor nation with $26.5 trillion in debt – and that’s before the new pandemic stimulus package Congress is debating now.

While policymakers in Washington debate the next round of pandemic stimulus – it’s worth remembering they are rolling the dice with our nation’s future with every new dollar they choose to print. They are printing new money to fund these emergency packages – and putting our future at grave risk.

Indeed, we are living in historically fraught times.

In a July 1 report, Deutsche Bank foreign-exchange analysts wrote that Trump, a Republican, has shaken up “policy orthodoxies and institutions” during this term. In contrast, former Vice President Joe Biden, the presumptive Democratic nominee, would likely pursue “policies that are more predictable and mainstream, with traditional U.S. alliances valued.” Yahoo Finance. July 6, 2020.

Are we witnessing the fall of the U.S. Empire?

Billionaire money manager Ray Dalio recently wrote about the typical cycle behind empire’s rises and declines. What is at the top? “Debt Bubble and Big Wealth Gap.” What lies ahead in this cycle? Debt bust and economic downturn. Printing money and credit. Revolutions and wars. Debt and political restructuring.

“We first saw the Dutch and then the British rise to become the richest and most powerful reserve currency empire and then decline into relative insignificance in cycles that were driven by timeless and universal cause/effect relationships.  We ended with the British Empire declining in the first half of the 20th century.  That brought us up to World War II, after which the British Empire was replaced by the US Empire.” Ray Dalio, July 16, 2020

We understand these are troubling issues. If you’d like to discuss the current economic environment, call your Blanchard portfolio manager today. We are here for you –and can provide advice on how you can protect your financial security for you and your loved ones now and for the future.