Has the Mighty U.S. Dollar Peaked? - Blanchard and Company
My Account

In the world of professional sports, after years of stellar performance commentators might say a talented athletic star has peaked. From there, it’s a slow gradual decline. 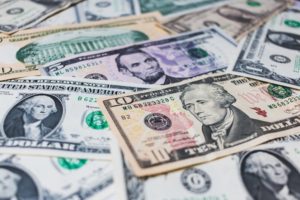 Sure, the professional athlete might show a few flashes of the previous greatness – but overall the trend points down. The previous raw talent, incredible moves and confident success of the aging athlete is diminishing – right before your eyes. Perhaps the athlete will retire from sports gracefully – or maybe he will stay in the game to the bitter end – and eventually only become a shell of his former talents and skills.

In the world of finance, a comparison is being made to the U.S. dollar and even our country as a whole. Perhaps, you’ve even heard some people compare the United States right now to the fall of the Roman Empire – suggesting America has peaked in its greatness – and our country is now in decline.

That’s debatable of course – and the outcome is still yet to be determined.

But, there’s no debating that the value of our U.S. dollar has taken a beating.

Part of the problem is that many officials running our country fail to acknowledge the policies that are driving this trend – which continue to devalue your hard earned dollars.

Policymakers are on the brink of passing another big government aid package – a $1.9 trillion emergency stimulus bill.

What does this mean for the U.S. dollar and gold ahead?

There are “very big signals that the proverbial kitchen sink is about to be thrown at an effort to prop up a fragile economy, an effort that may have short-term impact but in the long term will cause further pain and ultimately will be negative for the U.S. dollar and positive for gold,” Bryan Slusarchuk, chief executive officer of Fosterville South Exploration Ltd. told Bloomberg.

As our government continues to print new money – just like the aging athlete – commentators are warning the U.S. dollar decline is underway.

Has America peaked?  That’s debatable, of course.  America has long thrived because of our people – our hard working, entrepreneurial and determined spirit – we are a nation of innovators and we’d never give up on our beloved country.

Yet, the writing on the wall for the U.S. dollar is clear.

As an investor, you need to protect your wealth from government policies that steal your future purchasing power.

You don’t need to watch the aging athlete in decline – and watch your future financial security slip away because of it. There are simple steps you can take now to protect your financial future – like increasing your allocation to precious metals – which are recognized as hard currency around the world and can never be devalued by any government printing press.

Blanchard can help you diversify your assets out of a declining asset like the U.S. Dollar and into tangible assets. If you’d like to discuss your unique financial situation and long-term goals – and learn more about how increased diversification into precious metals can help protect your money – call a Blanchard portfolio manager today for a personalized portfolio review.

1 thought on “Has the Mighty U.S. Dollar Peaked?”