Many people believe the U.S. government was the first organization to mint gold mined in California. In truth, this historical touchstone belongs to Salt Lake City, Utah. 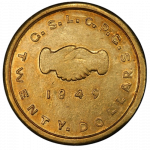 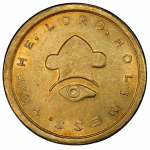 The origin of this story, however, does not begin in Salt Lake City. Instead, it starts in San Diego during the Mexican-American War. This was the destination of the Mormon Battalion. During their march some members of the battalion traveled north and eventually started working for James Marshall at Sutter’s Mill in Coloma, California. During this period the Mormon Battalion members assisted Marshall in discovering gold in early 1848. This find is part of what sparked the California Gold rush.

In time the Mormon Battalion founded their own mining town called Mormon Island. The location proved to be valuable leading to more gold discoveries.

In time, LDS president Brigham Young, and other officials John Taylor, and John Kay began work on dies to be used in the minting of the gold. By the end of 1848 Mormon members had their first gold coins. These original pieces had the words “Pure Gold” printed on one side and “Holiness of the Lord” on the other.

Eventually, the words “Pure Gold” were replaced with “S.L.C.P.G.” which is an abbreviation for Salt Lake City Pure Gold. These first coins included an image of a Phrygian cap which resembled the design of early coins minted by the US government. Below the cap was a design of the “eye of Jehovah” and a picture of hands shaking which symbolized friendship.

These designs changed over time. In 1860, Mormons minted pieces using gold sourced in Colorado. These coins included images of a lion and a beehive. Part of the reason for these new designs was to help territorial gold collectors identify them as belonging to a different sub type.

Other versions were minted in 1850 and 1860. The total number of minted coins was low, estimated to be approximately 4,000 pieces.

These early coins have given credence to the argument that Brigham Young was a crucial part of developing the coin system that came to define commerce in the early days of the U.S.  It is likely that these coins helped spark trade among the early territories and therefore accelerated the development of the country.

These pieces remain rare and are often sought after by collectors. They represent a pioneer spirit, industriousness, and the enduring power of friendship.