Queen Elizabeth – the world’s longest reigning monarch – was the face of the U.K. 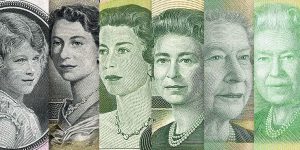 Even since her death on September 8th, her image remains a symbol of the country. The most lasting example of this is her portrait which has been on U.K. coins and banknotes since 1960.

With almost 5 billion U.K. banknotes circulating in the U.K., her picture is everywhere. In fact, her face can be found on the currency of 35 different nations. Her death has left some questioning if this will change.

The U.K. government has not signaled their intentions yet but precedent dictates that banknotes, coins, and stamps must change when a new monarch takes control. While such a change is not part of a formalized law, it is a long-held tradition.

Changes in the currency – like Queen Elizabeth’s reign of 70 years – are likely to unfold over a long period. It will require several years for officials to design, and print new banknotes and coins. Some estimates indicate that changing banknotes in the U.K. will take at least two years.

The royal family will need to commission an official portrait of King Charles III before proceeding with design changes. Before this happens the Royal Mint will continue to issue the current form of currency with the Queen’s image and has stated that they will remain legal tender.

In the meantime, nations circulating currency with the queen’s image will need to decide how, and if, they want to change their banknotes and coins. In Canada, a former British colony, the currency in circulation which depicts Queen Elizabeth on coins and the 20-dollar banknote will remain in circulation. The Royal Canadian Mint intends to keep this design in use for years to come.

Australia, another former British colony, is also in no rush to change the look of the five-dollar banknotes featuring the queen. The Reserve Bank of Australia does intend to introduce new coins showing the King within 2023.

The Reserve Bank of New Zealand has explained that they will wait until all of their current banknotes and coins featuring the Queen’s image are depleted before issuing new coins and paper currency with the King’s image.

These plans, and those of other countries, illustrate just how ubiquitous the Queen’s image has become over her lifetime. In 1935, at the age of 9, her image first appeared on the 20-dollar Canadian note. It would be another 35 years before the U.K. made her portrait part of their currency.

When the U.K. finally does alter their currency they will almost certainly feature King Charles III facing left on coins. This is part of a tradition in which a new monarch’s profile is shown facing the opposite direction of the monarch they have replaced. Queen Elizabeth’s profile always faced right on coins during her reign.

What remains clear is that Queen Elizabeth’s image will remain part of global currency for several more years. Throughout all of history no ruler has appeared on more legal tender that the Queen. That record is unlikely to be broken anytime soon.

Today the image of Queen Elizabeth II appears on currencies in 35 different nations some of which are dependencies of the UK. They are: