For more than 60 years, the United States minted the large cent. These coins, about the size of a half dollar, consisted of nearly pure copper. They were heavy, cumbersome and falling out of favor for commerce. By the early 1850s the time had come to issue something more practical, the Flying Eagle cent. 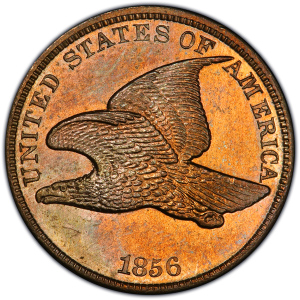 Copper prices were soaring and the cost of manufacturing the original large cent became cost prohibitive for the US Mint. Officials began exploring alternatives. One idea that gained some traction was an annular design; a coin with a hole cut through the center. However, after striking some prototypes, the mint discovered that the machinery could not eject the coins after punching the hole. Moreover, it became expensive to recover, melt, and reuse the center portion of the coin.

Despite this setback, Mint Director James Snowden proposed legislation in 1856 to press forward with a new coin to replace the large cent. He left the final decision regarding size and metallic composition to the Treasury. By March of 1856, the bill found its way to the Senate. A few weeks later it was amended so that the final piece would consist of at least 95% copper weighing.

James B. Longacre, portraitist and engraver for the Mint, began designing the relief images for the coin. His final look consisted of a flying eagle on one side and a wreath framing the text “One Cent” on the other. Legend has it that the inspiration for the design came from “Peter the Eagle,” an eagle that would frequent the premises of the Philadelphia Mint.

Later, the Mint took steps to shore up acceptance of the dramatically new look and feel of the coin. They sent early pieces to congressmen, members of the House Committee on Coinage, and other government officials.

These early 1856 pieces were considered transitional coins, not official currency because congressional approval was still pending. As a result, they are considered particularly valuable. Soon after the bill stalled. Tennessee Congressman George Washington Jones expressed his dissatisfaction with the coin believing it invalid because it wasn’t entirely gold or silver. In time, officials were able to defend the new coin and advance the bill through the process eventually getting it to pass.

The Mint encountered problems minting the design. The hard copper-nickel alloy led to broken dies and manufacturing problems. The Mint experimented with various alterations to solve the problem. They attempted making the relief of the eagle shallower to put less strain on the presses. By 1859 the Mint was prepared to replace the eagle design entirely with an image of Liberty wearing an Indian-style headdress.

1 thought on “How the Flying Eagle Cent Reinvented the Coin”