How the Shield Nickel Rebuilt U.S. Currency - Blanchard and Company
My Account

The chaos of the Civil War decimated U.S. currency. As a result, many people resorted to merchant tokens, encased stamps, and fractional currency. When the war ended, officials faced the daunting task of reissuing coinage. 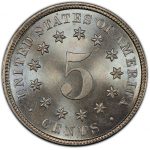 By 1864, Congress authorized the minting of a five-cent coin. It was not long after that things started to go wrong. It was decided that the coin would bear the image of “Clark.” By this officials meant the iconic explorer William Clark. However, officials later saw that this plan was misunderstood and that the design featured Spencer M. Clark who was then the head of the Currency Bureau.

This mistake, while funny, caused an uproar. The response to the error was swift. Congress immediately passed a law which forbade the issuance of any coin with the image of any living person.

Meanwhile, industrialist Joseph Wharton was continuing to exert his influence on Congress. Wharton was close to having a monopoly on the mining of nickel in the US. Therefore, he saw an opportunity to advocate for coins consisting of the metal. To accomplish this, he leveraged his connection to officials in Congress. By May of 1866, a bill passed which provided for a five cent coin consisting of 75% copper, and 25% nickel.

The work of designing the piece was handed to Mint’s chief engraver, James B. Longacre. In the interest of meeting a looming deadline, Longacre borrowed elements from the two-cent coin he designed. He took the shield appearing on the two-cent piece and applied it to the five-cent coin. This shield provided the coin with a bold look signifying defense and strength in the unity of a recently divided nation.

The top portion of the shield represents Congress, while the 13 vertical stripes represent the states. The crossed arrows at the bottom of the shield symbolize non-aggression with a willingness to attack if provoked.

Despite the dramatic look of the pieces, the design received widespread criticism. Many felt that the shield had the feel of a tombstone rather than a symbol of self reliance. Moreover, some of the design elements caused production problems. The dies used to mint the pieces had short life spans due to the hardness of the planchet. By 1867, officials had simplified the piece by removing the rays surrounding the “5” on the reverse.

By 1869 production of the coins dropped due to enough reaching circulation. In time they became known simply as “nickels.”

Many varieties of the coin remain today because the dies had to be replaced so often. Mint officials built these replacement dies fast, often leading to inconsistencies. The 1868 coin, in particular, has many errors. There are more than sixty different double die varieties caused by misalignment. Additionally, the 1873 piece has a variety known as the “closed 3” piece because the 3 in 1873 occasionally resembles an 8.

In 1883/2, the final year of production, some coins received a double date in error. As a result there was a 2 under the 3 in the date of some coins. This was due to the Mint’s decision to reuse the 1882 die and simply adjust the last number.

Despite the rocky history of the shield nickel this coin is the reason we refer to five-cents as nickels. The piece is a reminder that the work of rebuilding a nation touches on every conceivable aspect of life.