You can purchase a Mercury dime for a few dollars. Yet, some of the most coveted key dates and mint marks are worth north of $25,000. Not bad for a dime. 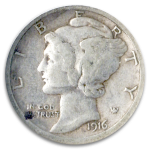 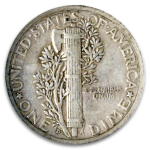 Collectors actively pursue this stunning coin for the exceptional design created by Adolph A. Weinman. The metal content is 90% silver and 10% copper. The mints include Philadelphia, Denver and San Francisco.

Weinman’s design shows the head of a youthful Liberty in profile. She wears a cap that has wings, which were meant to represent “Liberty of Thought.” The public, however, misunderstood Weinman’s intent, believing her to be Mercury, who wore a cap and sandals with wings. (This would make sense since Mercury is the god of commerce.) Weinman’s monogram AW sits on the right of the Liberty’s neck.

The reverse features an unusual (for those used to modern coinage) design: a fasces depicting unity and strength, and an olive branch symbolizing peace.

Mercury dimes debuted in 1916 – a groundbreaking and unique year in the history of U.S. coinage. In 1916, the U.S. Mint created three new silver coins and it marked the first year – ever – that different designs were used on the dime quarter and half dollar.

As a coin group, Mercury dimes aren’t rare. An incredible 2.5 billion were struck from 1916 through 1945. Mercury dimes were last struck in 1945, when a new dime was created to feature Franklin D. Roosevelt, following his passing.

During the depths of the Great Depression, no mercury dimes were minted from years 1932-1933.

There are several key dates for Mercury dimes.

Their scarcity increases their value into the thousands.

Blanchard recently had not one, but two 1916-D Mercury dimes. They are gone now. They sold fast.

Precious metals and rare coin prices are turning up. If you are interested in acquiring a 1916-D Mercury Dime or any other rare coin, we can help you do that. Blanchard has tremendous reach and respect within the rare coin industry.

Building sets of Mercury dimes can be an exciting and profitable goal.

Many collections of rare coin sets have sold for more than the total value of the individual coins. Coin investors typically follow one of two sets: “type” and “series.” A type set is comprised of all of those coins sharing a single specific characteristic such as a design, designer or denomination. A series include one coin from each date and mint of a particular type.

Other investing strategies include collecting by mint mark, by individual year, or first and last year of the issue of a coin.