Is America Barreling Toward A Debt Crisis? - Blanchard and Company
My Account

Students of market history know that it’s not a question of will there be another financial crisis – but when will it occur and what will be the trigger. History is littered with market bubbles that burst and the crises that followed. 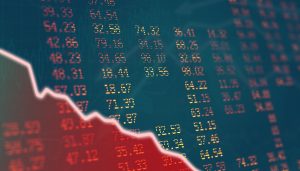 Walter Bagehot, editor of the Economist between 1860 and 1877, once stated that financial panics develop when the “blind capital” of the public floods into unwise speculative investments. Today’s cryptocurrency market collapse could be a prime example of that. Going farther back in recent history – the 2001 dot.com crash emerged after the public chased after and bought a variety of new technology companies that had zero profits – only potential.

Then of course, the 1929 stock market crash and subsequent Great Depression looms large in the economic history books. The stock market was booming in the late 1920’s as new companies embraced the technologies of the day including radios, aluminum and airplanes. Yet, few of these companies had a performance track record or dividend payments. However, speculators fueled by the fear of missing out (FOMO) drove the market ever higher. In October 1929, the speculative rally began to unravel with a nearly 25% drop in the Dow.

By November, the Dow had crashed 45%. In the wake of the 1929 market crash, banks failed and America entered an economic Depression that lasted ten years.

History shows that bubbles and crises are repeating patterns

From the Dutch Tulip mania in 1637 to the South Seas Bubble in the UK in 1720 to the more recent 1987 Black Monday stock market crash and the 2008 Global Financial Crisis, they are easy to find.

Sometimes crises are triggered by Black Swan events that you simply couldn’t see coming. Other times, crises build up over time, quietly in the background. That is what we are seeing today.

Many can see it coming and some ring warning bells. But, our nation’s debt feels so esoteric, so vastly huge that it becomes meaningless to the average American.

A recent Wall Street Journal article headlined: CBO Sounds a Warning of American Fiscal Ruin is another attempt to highlight this ticking time bomb that lurks behind the scenes of our daily lives.

Our nation’s national debt recently passed the $30 trillion mark, according to Treasury.gov

So what could lie ahead? The non-partisan Congressional Budget Office (CBO) warned in a new report that you may face two scenarios in the years ahead.

Spoiler alert. Neither scenario is pretty. Get ready for higher taxes and lower benefits.

“The first would gradually raise personal income-tax rates in equal proportion across the income spectrum. The second would gradually reduce benefit payments for Social Security, Medicare, Medicaid, and ObamaCare. The budget gnomes analyzed each scenario with three different starting dates, with fiscal tightening beginning in 2026, 2031 or 2036,” according to the Wall Street Journal article.

No surprise: the longer your representatives in Congress take to deal with this situations, the larger the tax increases and benefit reductions will be needed, the CBO said.

While higher taxes and lower Social Security and Medicare benefits sound bad, the alternative is even worse.

A debt-driven U.S. fiscal crisis in the future has the possibility of completely upending our way of life, our markets, interest rates, the dollar and our financial system as you know it.

Here’s what the CBO report said:

“The likelihood of a fiscal crisis increases as federal debt continues to rise in relation to GDP, because mounting federal debt could erode investors’ confidence in the government’s fiscal position and result in a sharp reduction in their valuation of Treasury securities. In turn, investors would demand higher yields to purchase Treasury securities and thus drive up interest rates on federal debt. Additionally, concerns about the U.S. government’s fiscal position could lead to a sudden increase in inflation expectations, fear of a large decrease in the value of the U.S. dollar, or a loss of confidence in the federal government’s ability to repay its debt in full, all of which would make a fiscal crisis more likely.”

This crisis would be a dollar crisis

If that were to unfold, your dollars would decrease in value by an exponential basis. Think it won’t happen? How confident are you in your lawmakers in Washington D.C. to work together, across the aisle, in a collaborative manner – making compromises – to achieve a deal to stabilize the nation’s finances. Too many politicians today are willing to gamble with significant financial issues in order to create news that will go viral in a social media world.

Gold offers you protection, yet again

If this day comes, investors holding an allocation to gold will have diversification and protection from a collapse in the U.S. currency, the dollar. Gold and silver are monetary metals that are recognized and valued in every country on earth. While the policymakers in Washington play politics with your hard earned paper dollars, tangible asset investors have a strategy to shield a portion of their wealth by investing in good old fashioned hard currency – gold.

Investors diversify into precious metals for many reasons. The looming fiscal crisis is simply another one to add to your list.