Is The U.S. Dollar Losing Its Role As the Global Reserve Currency? - Blanchard and Company
My Account

The U.S. dollar is the world’s reserve currency. For now. 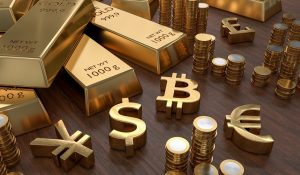 Being the global reserve currency means that when commodities from grain to oil are bought and sold between countries the medium of exchange is the U.S dollar. That benefits the U.S.  because there is on-going demand for U.S. dollars. China must use U.S. dollars to pay Brazil for soybeans, or pay Russia for oil.

That’s changing. Over the past several years there has been a significant movement in the world trading community to squeeze the U.S. dollar out of the picture.

Russia and China have cut deals and now trade crude oil with yuan, not U.S. dollars.

The trend to squeeze the U.S. dollar out of the picture is picking up speed.

China is now developing a brand new crude oil futures contract that would be priced in yuan and convertible into gold. It is expected to become a third global benchmark for crude oil trade.

This is significant as it allows countries to buy and sell crude oil, bypassing U.S. dollars. For those countries who aren’t comfortable yet with accepting yuan, the futures contract is convertible into physical gold. That means oil producers could get paid for selling their oil in physical gold. That’s a smart move on the part of the Chinese. Everyone acknowledges and accepts the value of gold.

China is the world’s second largest economy and in recent years has been demanding a seat at the table at global financial and monetary institutions. In late 2016, the International Monetary Fund added the renminbi (yuan), to its elite basket of reserve currencies in the Special Drawing Rights (SDR).

The new Chinese futures contract, however, will be convertible into physical gold. That represents some hesitation on the part of the global financial community regarding the Chinese yuan.

“In order for the renminbi to be considered a safe place for investors to put their money in times of turmoil, foreign investors and domestic investors in China must have trust in China,” says Cornell University economist Eswar Prasad. “And that is missing,” he adds.

In order to develop global trust in the yuan, China needs political and legal institutions like those in Europe, the United States and Japan. China does not have a democratic form of government with multiple checks and balances. It needs an independent and trusted central bank like the Federal Reserve. And China also would require a legal framework where the rule of law takes precedence over the Chinese Communist Party, and not vice versa, Prasad says.

The Rise and Fall of Reserve Currencies

From the Arab dinar in the Middle Ages to the Florentine florin in the Renaissance to the Dutch guilder to the British pound, reserve currencies change with time.

We are in the midst of a transition now. There is no clear currency that could replace the dollar, and that is in part why the shift is slow. But, there is movement. Some talk about how the SDR could become new global reserve currency. Read one view on that here.

What Does This Mean For You?

The decline of the U.S. dollar will come with a heavy price for Americans. It will mean less demand for dollars by world trading partners. That means an even greater glut of the U.S. paper currency, which is already declining in value. It also means higher U.S. interest rates. The U.S. runs a highly indebted economy. For now, foreigners are happy to finance our debt as they need U.S. dollars to buy and sell critical global commodities.

What happens when that changes?

For the individual investor, these developments are largely out of your control. It is likely only a matter of time before the U.S. dollar has less and less prominence on the world stage. With that come higher interest rates and less purchasing power of the dollar.

As the U.S. paper money decreases in value, the true value of hard assets like physical gold become even clearer.

Gold is a good insurance policy and a portfolio diversifier. New research from the CPM Group shows that between 1968 and 2016 your portfolio would have performed best if you had 27-30% of your portfolio in physical gold.

You can’t control what will happen to the U.S. dollar’s status as a reserve currency. But, you can control what’s in your portfolio now.

If you are concerned about the impact of the changing global conditions on your investments, please share this article with your family and friends. They need to know too.