When predicting investment growth people often look to the current president for clues. Traditionally, people have believed that the political affiliation of the person occupying the oval office drives movements in the financial markets. Is this assumption well-founded? 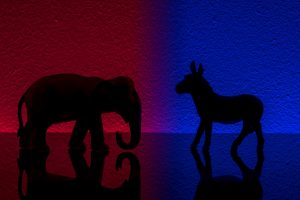 Today’s world bears little resemblance to that of our founders. Simply out, there are more moving parts. As a result, the office of the U.S. President, while powerful, wields far less influence than many realize. As one writer for The Atlantic astutely observed, “the president controls one branch of the government, the federal government accounts for merely one-fourth of GDP, and today the U.S. economy is merely a slice (albeit a big slice) of multinational companies’ revenue pie.” The revelation that the president has diminishing control over the financial world has been extended to the broader economy.

“Presidential economic records are highly dependent on the dumb luck of where the nation is in the economic cycle,” explains The New York Times. They continue, “even in areas where the president really does have power to shape the economy – appointing federal reserve governors, steering fiscal and regulatory policy, responding to crises and external shocks – the relationship between presidential action and economic outcome is often uncertain and hard to prove.” This message has particular relevance today because the Federal Reserve is facing a $4.5 trillion balance sheet.

In October, the Federal Reserve will begin the process of reversing the quantitative easing measures taken at the dawn of the global financial crisis. Doing so means gradually reducing the long-term Treasuries and the mortgage-backed securities that comprise much of the $4.5 trillion taken on to ease the strain on the financial system. The process will take years, not months. Meanwhile, other central banks around the world are gradually removing similar support measures. Certain aspects of the market have responded. For example, bond prices have dropped.

However, despite this momentous move, we may learn, once again, that policy has a limited impact on long-term financial market movements, especially gold. As we discussed in a previous post, the correlation between interest rate movements and the price of gold is weak despite long-standing conventional wisdom that they’re linked. Gains occur over the long-term. While policy may influence prices, such events are likely to be short-lived. Interestingly, the illusion of the policy-driven market is due, in part, to investors responding to such policies rather than the directives themselves.

While gold investors may take the Federal Reserve’s news as a signal to alter their holdings the fact remains: markets largely drive themselves while policymakers ride shotgun. In fact, it could be argued that gold is even more resilient than other assets to the policy mandates of the U.S. government. Since 2000 the price per ounce of gold has regularly exceeded the growth of the S&P 500. In truth, impactful changes to an investor’s holdings often, though not always, occur over a much wider period of time. This greater horizon is necessary for a major shift to unfurl. The takeaway: smart investing is long-term investing.