Meet Me in St. Louis: The 1903 Louisiana Purchase Exposition Gold Dollar - Blanchard and Company
My Account

Many people forget how much of history is governed by chance. There is no better example of this than the circumstances leading up to the Louisiana Purchase. This enormous part of the U.S. passed through several owners before finally becoming a part of the nation’s identity. 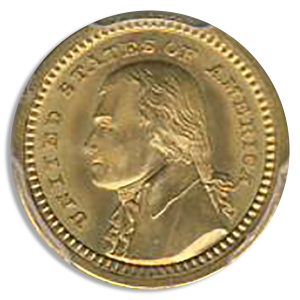 Originally, the 530-million-acre section of land was owned by France because of French explorers who originally laid claim to the area in the late 1600s. During this time, the French built a few settlements near the Mississippi. However, by 1762 the French ceded the entire area to Spain via the Treaty of Fontainebleau. This agreement was conducted in secret as the French had recently suffered defeat in the Seven Years’ War. As a result, the territory west of the Mississippi fell to Spain while the territory to the east went to the British.

By 1799 Napoleon was in power in France. With his grand ambitions to revitalize the French empire he was able to reclaim, through formal agreements, the Louisiana territory from Spain. This arrangement was intended to be secret, however, President Thomas Jefferson learned of the transfer and immediately acted to secure the lower Mississippi area for the U.S. to ensure the port of New Orleans remained accessible to American shipping. The deal would end up being far more expansive, and expensive, than Jefferson imagined.

Napoleon was in fact prepared to sell all the territory. The reason: Napoleon believed that he was at risk of losing the region to the British. However, if he sold the area while it was still in his control, he could at least gain financial compensation for the territory. The U.S. paid $15 million for an area totaling 828,500 square miles. Officials signed the treaty in 1803. The result was the doubling in size of the United States.

Nearly 100 years later Congress authorized a $15 million budget for the Louisiana Purchase Exposition, which was popularly known as the St. Louis World’s Fair. The exhibition included participants from over 60 countries and nearly all the 45 states in existence at the time.

To commemorate the event Congress authorized the minting of 250,000 gold dollar coins. Farran Zerbe, the President of the American Numismatic Association at the time, proposed minting two designs to boost sales by enticing people to own the two-coin set.

Both coins would have the same design on the reverse, an olive branch, and the anniversary dates. The obverse of one coin would feature Thomas Jefferson’s profile, and the other would feature William McKinley’s profile. Initially, the intent was to sell the coins to those attending the World’s Fair for $3 each. This price made the coins relatively expensive given that it was triple the face value.

In total, 20 million people attended the fair and the popularity of the event inspired the song “Meet Me in St. Louis.” Today, the remaining exposition coins are a reminder of the earliest days of the nation and the chance events that gave rise to the expansive territory of the United States.