While Bitcoin plunged 48% over the past four months, the numismatic market remains strong at the start of 2022 – extending its incredible run over the past two years. 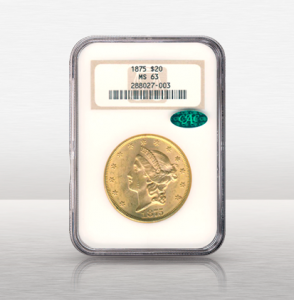 The start of the current boom in rare coin prices can be traced to the beginning of the pandemic in 2020, which triggered a renewed interest in tangible assets like rare coins. Both the number of sales of rare coins and the prices paid for rarities exploded higher over the past two years industry-wide. At Blanchard, we saw stunning demand from new clients and long-time clients who had been inactive in numismatics for a period of time.

A Return to “Real” Assets

Looking back, the unsettling financial market volatility in 2020 reignited investor interest in real and tangible assets. You may recall, between February 12, and March 23, 2020 the Dow lost a stunning 37% of its value and the crude oil marked tanked – briefly trading below $0/barrel.

The chaos in the financial markets during the pandemic renewed investor appetite for tangible assets like rare coins that you can see, hold, and pass on physically and privately to your heirs. Rare coins and gold hold a distinct advantage over cryptocurrency, and even stocks, in that they have thousands of years of history of preserving wealth. With the stock market at extended highs and showing increased volatility now, many of our clients are taking profits on their stock positions and rolling those funds into their rare coin portfolio.

The prices of key rare coins soared 16% versus year-ago levels, according to an industry index created by the Professional Coin Grading Services (PCGS). Perhaps even more impressive, the key rare coin price index shows a 6,315% increase since it was created in 1970, underscoring the wealth appreciation aspect of long-term numismatic investing.  As Blanchard’s Sales Manager, Ed Wehrman, says, “have you seen the number of all-time highs in ultra-rarities making the headlines?”

As we enter 2022, demand for rare coins remains extremely high, while supply is the tightest level seen in decades. The pace of rare coin sales is brisk and high-quality rarities move nearly instantly once they become available.

David Zanca, Senior Portfolio Manager at Blanchard, describes current rare coin market conditions: “Prior to the pandemic I would have availability on as many as 500 rare coins.  Today, that number is closer to 30 or 40 coins.  Recently, we have begun to see more pieces come available.  But, every rare coin that we source is either pre-sold or is placed in a matter of minutes of hitting the market.”

“On a recent Friday afternoon six rarities became available, averaging in the neighborhood of $150,000 per piece.  Every single piece was placed by noon the next day – Saturday,” Zanca said.  At Blanchard, many rare coin investors take a long-term approach, typical across the country today – which is contributing to the tight rare coin supply conditions. “I offered a client nearly $500,000 cash on the spot for a coin that represented a nearly 40% profit and they wouldn’t consider selling,” Zanca said.

Indeed, the demand from well-positioned rare coin investors has been unrelenting, as both high-net worth and mom and pop investors implement a strategic shift from paper assets into hard assets with the focus on preservation of wealth.

Despite the tight numismatic market supply, Blanchard has been very successful in unearthing several private holdings. Blanchard’s ability to source and place hallmark coins underscores our on-going commitment to quality and deep roots in the numismatic market nationwide.

Blanchard recently placed two flagship rarities including the 1794 Flowing Hair Dollar and the 1808 $2½ Capped Bust Quarter Eagle. Given the tiny mintage and the concentration of wealth in the United States in that era, these hallmark coins could very well have been owned by one of the American greats of that time.

Numismatists call the 1808 $2.50 Capped Bust a “stopper coin.” (Stoppers are the coins that have historically presented the greatest difficulty in completing a set.) From the day this Quarter Eagle  was minted it was a rarity, with only 2,710 coins produced. The vast majority were melted and no longer exist. The few collectors who are fortunate to own this 1808 Quarter Eagle have the most sought-after coin to complete their set, as it can be many years before a coin like this even emerges onto the market for sale.

Another coin Blanchard recently placed: the 1794 Flowing Hair Dollar was the first dollar coin issued by the newly established United States federal government and represents the beginning of the American monetary system. When Blanchard recently placed this coin with a collector they became not only an investor, but a preserver of American history and safe keeper of the beginning of our nation’s monetary system. These legacy investments not only preserve and increase wealth, but also preserve and honor United States history.

Given current market conditions, Ed Wehrman advises, “get started now. Talk with your Blanchard portfolio manager and create an acquisition plan.” Rare coin investors who have a plan in place are well positioned to acquire high quality and tremendous investment pieces.