It was one of the boldest campaigns in history: the conquering of the mighty Inca Empire.

And who led it? An illiterate man born in poverty, the illegitimate son of a soldier and a servant. What drove him and his men was an insatiable desire for gold. 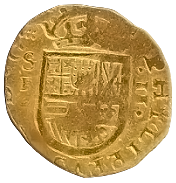 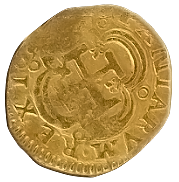 The Incas called gold “the tears wept by the sun,” and they used it for ornamentation. The golden temple of Coricancha, for example, was filled with gold, with one room containing a giant sun disc that reflected sunlight to illuminate the rest of the temple. The disc was even aligned so that during the summer solstice, it illuminated a place where only the emperor was allowed to sit. When the Spanish took Cusco, they destroyed most of Coricancha and melted down the gold plating and sculptures to send back to Spain.

From that and mints in the New World, the Spanish sent gold back to Europe in quantities the continent had never seen. And on those voyages, one of the treasures that pirates risked their lives for was the gold cob: coin of an empire.

All known examples of this coin came from the shipwrecks of the Santa Margarita and the Nuestra Señora de Atocha. Both sailed with the 1622 treasure fleet and sank off the coast of Florida.

Today we bring you a beautiful specimen of one of those cobs: a 1622 gold escudo. This 1622 gold escudo was the first gold coin struck in the New World. Gold escudos were introduced by Spain in the 16th century and became the nation’s primary gold currency. They were minted in Madrid and Seville, as well as in several of Spain’s colonies.

Cobs are coins that were struck and trimmed by hand. When you handle a gold cob, you thus hold in your hand the handiwork of a 17th-century minter: someone who struck your coin 400 years ago.

Want to read more great rare coin stories? Sign up for our newsletter! In addition to numismatic news, you’ll get weekly updates with the latest market news and investment advice.