Only $361.03 of These Coins Were Produced (Face Value) - Blanchard and Company
My Account

It’s also controversial and was only minted for one year, which increases the rarity value of any survivors today. 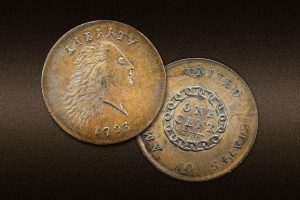 The 1793 Chain Cent is one of the first coins American collectors began acquiring in the 1800’s.

Today, the 1793 Chain cent remains a highly sought after piece of history. The auction record? A cool $1.5 million.

The large Chain copper cent is about the size of a quarter, much larger than modern day pennies. It was the first circulating coin officially produced by the U.S. Mint. A total of 36,103 were struck in 1793, the only year the coin was produced. Only a tiny number of these magnificent Chain Cents have survived over the last 226 years.

Amid rising world copper prices and tight supplies in 1792, Mr. Rittenhouse arranged for imports of sheet copper from Great Britain. He also appealed to Congress and successfully won approval for a reduction in the weight of the cent, from 264 to 208 grains to help cut costs.

A second challenge? The U.S. Mint had no engraver. Rittenhouse persuaded Henry Voight, the chief coiner, to cut the first dies. Voight’s previous experience as a watchmaker left him ill-prepared for engraving.

The Obverse design featured a Liberty head with flowing hair. The reverse featured an interlocking chain with 15 links to represent the existing 15 American states at the time.

An article in the Boston Argus of March 26, 1793 stated: “The chain on the reverse is but a bad omen for Liberty, and Liberty herself appears to be in a fright.”

Liberty’s appearance is likely a result of Voight’s inexperience in engraving. While the chain was intended represent unity and strength of America, critics said it was symbolic of slavery.

The uproar over the Chain cent design sent the government back to the drawing board. The following year, a wreath replaced the chain, and a better Liberty was engraved for the obverse.

Chain Cents are scarce. We have only one. See it here.

Add to Your Collection Today

The study of the history of money is a fascinating journey that opens the door to periods of history with rich detail and little known facts that you might not otherwise have learned.

Looking back and learning gives you a greater appreciation of the significance, artistic excellence and thought and care that drove the minting of early U.S. coins. See our rare coin inventory here.