Over 270 million Morgan silver dollars met their fate in the melting pot under the provisions of the Pittman Act of 1918.

The U.S. government ordered this dramatic move to save Great Britain from a banking collapse and may have also helped the Allies win the war.

How did this great silver meltdown come to pass? 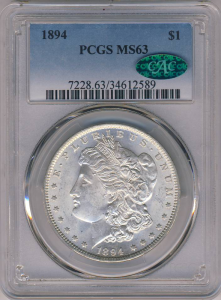 Back then, international trade was conducted in gold.

Allies were buying steel, food and supplies to maintain their massive armies and paying in gold bullion. Gold became scarce. Hoarding was popular as the price was rising and exceeded face value of the coins. Great Britain resorted to silver certificates to pay for goods from India, its colony at the time, which was a major contributor to the war effort.

However, Great Britain had a silver problem. Germany began spreading rumors that Britain did not have enough silver to back the paper certificates it was using to buy war supplies, which many think was actually true!

Fortunately, for the war effort, America had a lot of silver dollars. At that time in the United States, of course, silver dollars could be redeemed by any citizen at any time for a silver certificate.

Senator Key Pittman of Nevada proposed legislation – the Pittman Act – and the United States came to the rescue. Passed on April 22, 1918, the Pittman Act authorized the melting of up to 350 million silver dollars – which could be sold to Britain for one dollar per ounce of bullion.

Millions of Morgan silver dollars were melted down in 1918 and shipped to England to avert crisis.

Britain honored its silver certificates and the U.S. silver sale helped prevent a banking collapse, riots in India over non-payment and helped keep the Allies flush with the money they needed to win the war.

Over 270 million Morgans are gone forever, lost to the melting pot. The dramatic history and significance of those remaining are what keeps collector interest high.

No good records were kept about which mintages were melted down, which has resulted in some surprises over the years.

Some of notable interest are Carson City Morgan silver dollars minted from 1880 through 1885. Why did so many survive? The answer is simple. When Carson City stopped producing coins, the Morgans were shipped back East and ended up in the back of the U.S. Treasury vault. During the great silver meltdown, coins were simply taken from the front and middle of the vault until no more were needed. The Carson City coins escaped melting pot since they were in the back of the vault!

Just getting started? Collectors often covet both the first and last year Morgan dollars – 1878 and 1921 – as they represent the beginning and end of this highly desirable coin series.

Do you have any Morgan silver dollars? Leave a comment below.

Want to read more? Sign up for our newsletter and get our tales from the vault, our favorite stories from around the world and the latest tangible assets news delivered to your inbox weekly.

1 thought on “Over 270 Million of These Coins Were Melted”