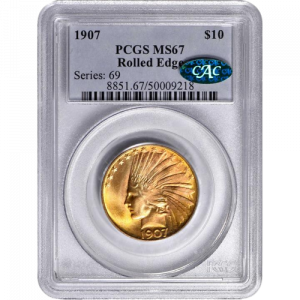 Over an eight-year period, Blanchard advised the late Dr. Paul Zito, a medical doctor from New York, and his wife Rosalie. Through Blanchard’s deep numismatic connections, the firm sourced for them a historic collection of 92 U.S. gold and silver coins.

This week, 89 lots from their collection were presented at public auction and sold for over $4.3 million. Blanchard helped the Zito family to achieve their goal to diversify their portfolio with a collection of high-quality and ultra-rare tangible assets.

Investors quickly bid on the rare U.S. gold and silver coins once they became available and the entire collection sold immediately. “This underscores the high demand and limited supply for ultra-rare numismatics in today’s environment with inflation at 40-year highs, expansive monetary policies and a slowing U.S. economy,” said David Zanca, Senior Portfolio Manager at Blanchard, who worked with the Zito family over 8 years to build this fabulous collection.

The start of the current boom in rare coin demand can be traced to the beginning of the pandemic in 2020, which triggered a renewed interest in tangible assets, including rare coins. Both the number of sales of rare coins and the prices paid for rarities exploded higher over the past two years industry wide.

The NGC MS68 1907 $10 Indian Wire Edge is tied with one other at MS68.  Interestingly, the other MS68 is the Steinbrenner coin, also placed by Zanca. Until the Zito piece was placed last evening, the Steinbrenner coin held the auction record, having sold in August 2019 for $432,000.  Now, not even three years later, the Zito piece set a new record having sold at nearly double the prior record at $840,000.

One lot later, the CAC PCGS MS67 1907 $10 Indian Rolled Edge made its own bit of history by shattering its previous record price. The Zito piece is tied with the Pogue coin as the finest known within the CAC population.  Just two years ago the Pogue coin was placed at $576,000.  The Zito piece blasted past that number and settled at $1,140,000.

“It’s incredibly satisfying to see the results for these long-term clients.  Seeing the Steinbrenner Wire Edge break the record at $425,000 in 2019 was amazing.  Now, not even three years later to see another of my clients’ pieces nearly double that record is a testament to what is happening in the rare coin market.  As to the Rolled Edge, seeing a client realize well over $1 million for a coin is just wonderful.  It proves that if an investor acquires quality and sticks with a plan that, literally, world records can be broken.”

Other outstanding coins sourced by Blanchard from the Zito collection include:

The Blanchard sourced collection highlights the firm’s unmatched ability to secure the best rarities for its clients.  “Since 1975, Blanchard & Co. has been the premier rare coin dealer in the country. With a specialty in legacy coins, our firm has placed more significant numismatic coins than anyone in the industry,” Zanca said.

Despite the tight numismatic market supply in 2022, Blanchard has been very successful in unearthing several private holdings. Blanchard recently placed two flagship rarities, including the 1794 Flowing Hair Dollar and the 1808 $2½ Capped Bust. Given the tiny mintages and the concentration of wealth in the United States in that era, these hallmark coins could very well have been owned by one of the American Greats of that time.

“We continue to have incredible reach within the numismatic community and can almost always find whatever you are looking for even in the current extremely tight market conditions,” Zanca said.

Founded in 1975, Blanchard is the largest and most respected investment firm in the U.S. that specializes in precious metals and rare coins. Headquartered in New Orleans, Blanchard has owned and sold more than half of the published 100 Greatest U.S. Coins with over $1.3 billion in sales in the last four years alone. With over 520,000 customers to date, Blanchard has provided investors and collectors with the expert consultation they need to strategically acquire American numismatic rarities and gold, silver, platinum and palladium bullion.

David Zanca is a 28-year veteran of the precious metals industry and senior portfolio manager at Blanchard. He can be reached at 1-800-880-4653.