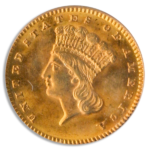 In 1854 the U.S. Mint’s chief engraver, James B. Longacre, reached a milestone in his career. For the first time, he would choose the design for a piece of currency: in this case the three-dollar gold coin. Much of the currency up to that point favored designs that referenced the Romans and the Greeks. However, Longacre decided to go in a different direction.

He wanted to choose something that was closer to the American identity rather than imagery from “the barbaric period of a remote and distant people.” He decided instead to depict Liberty in an Indian princess headdress. For Longacre it seemed more important, and more interesting to choose this design which was more emblematic of the frontier and of America as a whole. The reverse side consisted of an agricultural wreath of corn, tobacco, cotton, and wheat. This also was an image selected to properly represent aspects of life that felt uniquely American. It seemed that, in many ways, Longacre wanted to make a design that was undeniably his own and, in identifying so deeply with the American spirit, he had to allow this sense of Americana to flow through the look of the coin.

While the design carried much spiritual weight, the origin of the piece was due to far more pragmatic reasons; a $3 coin would be a simpler denomination for the practical purposes of purchasing things like a sheet of 3-cent stamps. Additionally, the substantial gold content of the piece (90% gold, 10% copper) would make good use of the ample gold deposits found in California at the time.

Longacre’s decision to adorn the coin with Native American representation was a impactful given that the production was the largest of any three-dollar piece ever produced by the Philadelphia Mint at that time. Soon after more pieces were struck at the San Francisco Mint. Despite the practical need for a gold three-dollar piece the coin experienced backlash as many complained that the denomination was not as clear as it could have been. Therefore, in 1855 the words “Dollars” were enlarged in the design to help distinguish the piece from the quarter eagle coin for which it was occasionally confused.

By the early 1860s, the circulation of the coin became limited, especially in regions like the East and Midwest, as gold and silver became scarce amid the upheaval of the Civil War. Despite this, the Mint continued to issue the coin until 1889 when Mint Director James P. Kimball remarked that the denomination served no useful purpose and was sought after only by the occasional collector. Soon after, officials decided to cease minting the coin and melt the pieces that remained at the Philadelphia Mint.

While the coin did not enjoy as much popularity or circulation as other pieces it accomplished something far more important. Longacre’s design introduced imagery of Native American’s more deeply into the fabric of the country. His work represents a juncture where the identity of the country became more enmeshed with its own history rather than the romanticized notions of the Greeks or Romans. The Indian Princess three dollar coin is a true American piece.