On a Sunday morning in 1865, a paddle steamer called the Brother Jonathan departed Crescent City Harbor, California. The ship was the idea of Edward Mills from New York. His original aim was to create a route from New York to Chagres, Panama. This was to be the first of a two-leg trip. After reaching Panama travelers could continue, via another ship from Panama to California, which was attracting people from all over the country as the Gold Rush instilled a sense of promise for so many seeking riches. 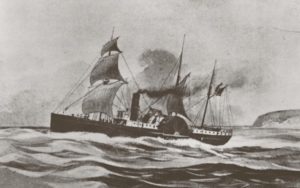 Railroad and shipping magnate Cornelius Vanderbuilt purchased the ship just a year after its completion. He repurposed it, making it larger to in order to fit more passengers and used it as a replacement for one of his previous ships which was destroyed in a wreck. He used the ship as a vessel in his agreement with the Nicaraguan government ,allowing him to transport passengers through the isthmus of the country. However, a few years later, after Vanderbuilt’s exclusive contract with the Nicaraguan government was cancelled the ship changed hands once more and operated along West Coast routes. In the following years the ship had several other owners and enjoyed a reputation for its speed.

The ship’s final voyage began when Captain Samuel DeWolf departed San Francisco Bay for Victoria, British Columbia. A fierce storm ensued and the captain docked in Crescent City Harbor. This was only a short reprieve; soon after leaving the harbor the ship encountered another dangerous storm. Facing such punishing waves the Captain was forced to turn back. He almost made it.

The ship struck a rock leaving a gash in the hull. The vessel was doomed. All passengers and crew were ordered to abandon the ship. Though there were enough lifeboats for everyone onboard, there was only enough time to properly deploy three. As a result, only 19 of the 244 passengers survived. The loss of life was devastating.

The financial loss was also considerable. The ship was carrying a current day value of $50 million in gold consisting of bars and coins. Salvage efforts began almost immediately after the sinking but the attempts ended in failure. It was not until 1993 that a successful expedition carried out by Deep Sea Research (DSR) located the ship. Much of the difficulty of finding the treasure was due to the fact that the ship in fact sank two miles from where it struck the rock. This might also explain why another three years were needed to locate the coins sitting in crates on the ocean floor. After the initial discovery, divers recovered 875 $20 Double Eagle gold coins. Further efforts yield a total of 1,207 coins.

Legal battles followed. The state of California claimed ownership of the gold. After years of fighting, the U.S. Supreme Court ruled on the case in 1998, deciding that the find belonged to those who salvaged the coins from the wreck. The state, however, would not relent. They made clear their intention to bring the case to the Supreme Court a second time. Though a win for the state was unlikely, the salvagers were unwilling to continue spending on legal fees. Therefore, both sides reached a settlement in which the state received 20% of the value of the find. Soon after, DSR initiated a sale of 1,006 of the coins earning a total of $6.3 million.

Despite the incredible find, many estimate that 80% of the total value of the treasure still remains undiscovered.