The Fugio cent offers insight into the psychology of the nation in its earliest days. The design was the work of Benjamin Franklin and represents two key ideas that seem to be ever-present is his work and life: dedication to one’s business affairs and an unwavering desire to remain productive. 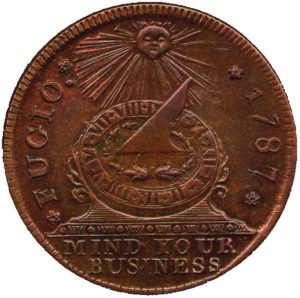 The coin was minted from copper and was developed when the Congress of the Confederation authorized the design. Production lasted for only one year in 1787.

The word “fugio” on the coin is Latin for “I flee.” This word, in combination with the image of a sundial, is a reference to the perception that time escapes us and is always rushing by. The decision to convey this idea may have emerged from the immense change Franklin experienced in his life over such a short period. Or, perhaps it was his attempt to communicate that there was still much work to be done amid the nation building he was pursuing. What remains clear is that Franklin’s writings, including his autobiography, communicate an intense need to achieve goals and better himself with every passing day. The design of the piece echoes this strongly.

Interestingly, Franklin also decided to include the words “mind your business” on the coin. This could easily be confused with the common contemporary phrase “mind your own business,” however Franklin did not intend to communicate this idea. Instead, he likely meant to communicate that others should literally keep their business affairs at the center of their thinking. Franklin himself was a fervent business man.

On the reverse side was the motto “We Are One” referring to the solidarity of the thirteen original colonies which were represented visually with thirteen linked rings around the perimeter. In time this motto would be replaced with “E pluribus unum.”

Like so many other early coins there were errors made along the way. It has been reported that an additional fifth line was mistakenly added to the Roman numeral IIII on the ring surrounding the sundial. To correct this flaw the die was adjusted to include a small design flourish intended to cover the extra stroke. Additionally, the “G” in “FUGIO” had to be accomplished by adding a small crossbar to the letter “C” which was mistakenly part of the press.

Just one year after minting began the Bank of New York allocated several thousand of the coins to storage. They remained in storage for more than six decades until they were transferred to another area in the basement. They sat for another seventy years before being rediscovered in 1946 when many of the coins were distributed to individuals as souvenirs. All of the coins were in mint state condition upon discovery. After distributing several thousand pieces the bank retained 819 coins which are believed to still be in their possession today.

Today the imperfections of the design and forthright style of the words engraved represent a charming roughness that is emblematic of the burgeoning years of the nation. Moreover, the Fugio cent is a testament to the boldness of Benjamin Franklin and his urging to all others that our time is short and we must make the most of it.