It was the 1850s and the U.S. Mint had a problem. The “large cent,” which was simply a penny, was becoming too expensive to manufacture. The coin was nearly the size of a half dollar and consisted entirely of copper. They needed an alternative. 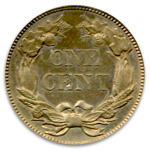 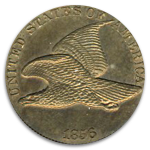 Officials began working on solutions to the prohibitive cost. Some suggested an annular design. This style of coin has a hole punched in the center. This feature would dramatically reduce the amount of copper needed to manufacture the piece. This idea, however, didn’t last long. The difficulty of punching a hole out of the center proved time-consuming during the minting process. Additionally, officials realized that they would need to expend extra effort and expense to gather the remaining metal left behind from the punching for melting and reuse.

Ultimately, the designers selected an alloy of 88% copper, and 12% nickel, packed into a coin that was about half the size of the original. The design was simple; an eagle on one side and a wreath on the other. Legend has it that the inspiration for the design came from “Peter the Eagle,” an eagle that would frequent the premises of the Philadelphia Mint. Today, Pete’s legacy lives on in more ways than one. He is not only on this piece; his preserved body is on display in Independence Hall in Philadelphia. The wreath is a design element borrowed from Type II gold dollar of 1854, and the three-dollar piece of the same year.

The Flying Eagle cent met with some resistance initially. Tennessee Congressman George Washington Jones expressed dissatisfaction with the coin. He cited the Contract Clause of the Constitution which he interpreted as a mandate that only gold and silver could be used for minting coins. Soon after, New York Congressman Thomas R. Whitney also voiced objections. He believed that a provision in the bill which allowed for the public to commission and design coins was in poor practice and would force the U.S. Mint and private mints into competition. After removing this provision, the bill passed.

By 1857 the coin was available to the public. People were eager to sell their old large cents in exchange for a canvas sack of Flying Eagle Cents totaling $5. In fact, on this first day of availability, the Philadelphia Mint sold nearly 3 million Flying Eagle Cents right on their premises. Over the remainder of the year, millions more were sold.

Despite the coin’s popularity, the piece was short-lived. Broken dies and other manufacturing problems plagued production. The primary problem was that the hard copper-nickel alloy put excessive strain on the equipment. Officials made some modest changes to the height of the relief of the images in an attempt to solve the problem. However, issues persisted and in 1859 the Mint was ready to replace the design. As a result, the earliest 1856 specimens are rare.